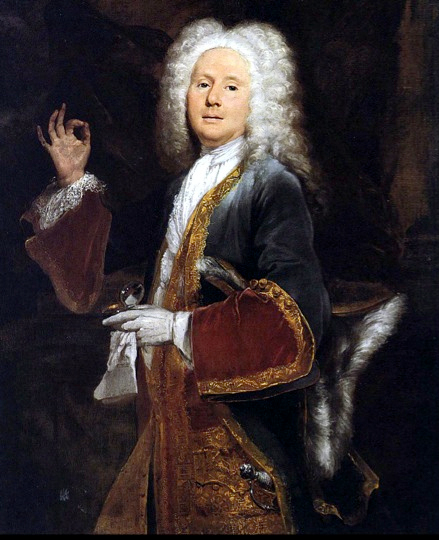 Colley Cibber, actor, writer, and theatre manager, was born 6 November 1671 at Southampton Street, Bloomsbury, London. He was the eldest child of Caius Gabriel Cibber (1630–1700), sculptor to Charles II, and his second wife, Jane (ca. 1646–1697), daughter of William Colley of Glaston, Rutland, and granddaughter of Sir Anthony Colley, soldier and parliamentarian, and supporter of Charles I.

As an actor he was known for his comedic roles as Sir Novelty Fashion, Lord Foppington, Sir Courtly Nice, and Sir Fopling Flutter, as well as more serious roles such as Richard in his own version of Richard III.

In 1709 he led a group of Christopher Rich's aggrieved actors from Drury Lane to the new Queen's Theatre in the Haymarket, resulting in Rich losing the patent to manage Drury Lane, and in 1710 he and the other actors returned to the theatre, which would be under the management of William Collier, Cibber, and Thomas Doggett.

The long and famous quarrell between Cibber and Alexand Pope began in 1717 when Cibber played the role of actor-playwright Plotwell in the farce Three Hours after Marriage at Drury Lane Theatre written by John Gay and, as later revealed, Pope and John Arbuthnot. Cibber did not recognize until he had played the character Plotwell on stage that it was a satire on himself, and got back at the three by including in Buckingham's The Rehearsal a month later a burlesque of one of the scenes from Three Hours after Marriage. This infuriated Pope, who went backstage, called Cibber a rascal, and later summoned Gay to come and thrash Cibber. The ensuing fisticuffs resulted in the guards taking Gay away.

A strong supporter of the Hanoverian succession, Cibber was appointed Poet Laureate in December 1730, a position that earned him the honour of replacing Lewis Theobald as Pope's King Dunce.

Cibber retired as Theatre manager in 1733, published a self-aggrandizing biogray, An Apology for the Life of Mr. Colley Cibber, Comedian, in 1740, and died in London on 12 December 1757.