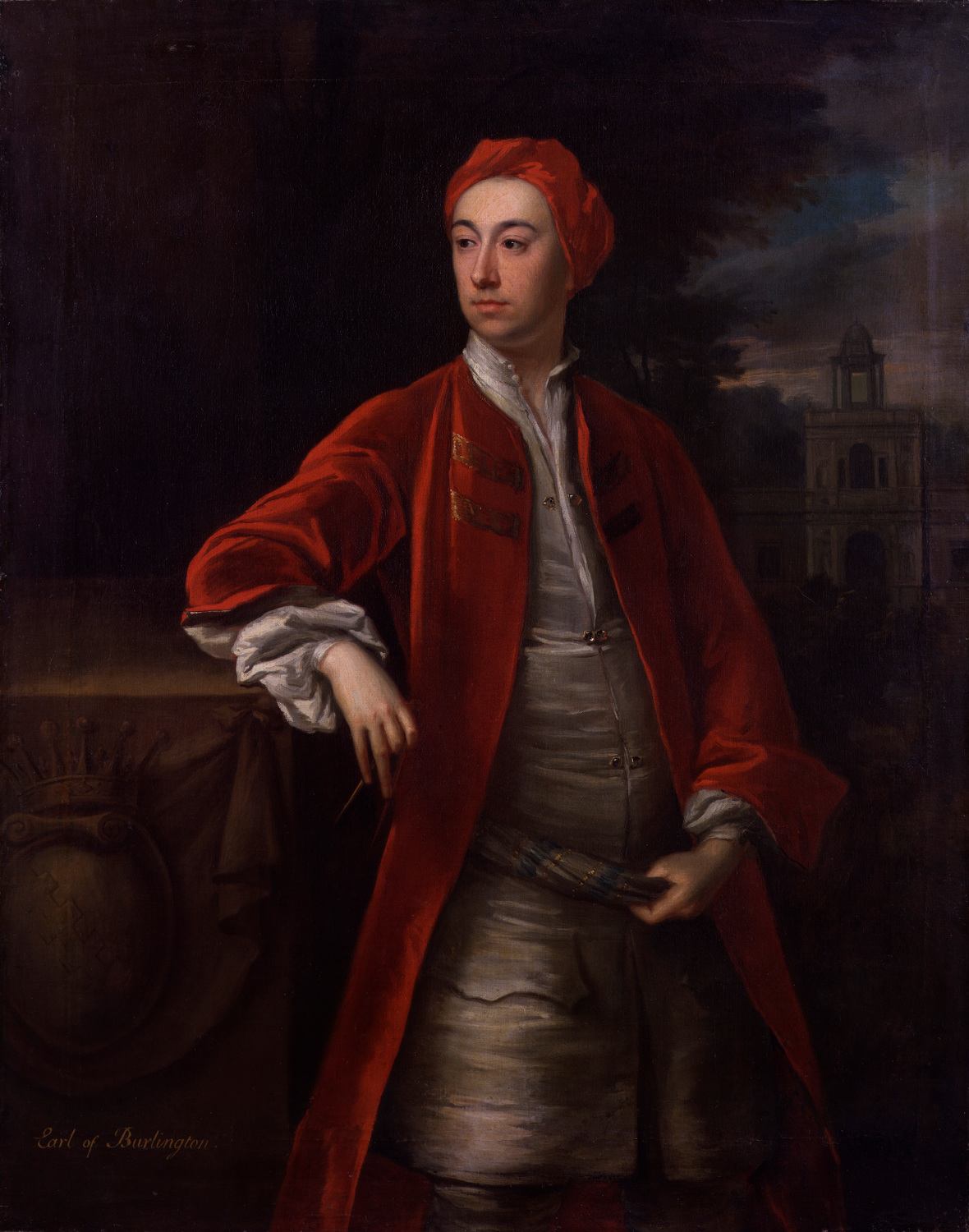 When Richard, Lord Boyle entered the world at Burlington House, Piccadilly, on 25 April 1694, he was truly born into the purple dyes of the Anglo-Irish aristocracy. The English earldom that he would inherit at the age of nine was not one of ancient lineage, as it had been bestowed on his great-grandfather in 1665. However, his Irish title as fourth Earl of Cork went back further, and brought with it huge landownings in Ireland previously granted to Sir Walter Ralegh. The most distinguished member of the family was the physicist and chemist Robert Boyle (1627–91), brother of the first Lord Burlington.

The boy went on to live for almost sixty years, but he would never visit his Irish estates. Instead, he became an unwavering Europhile with cosmopolitan tastes as a collector and patron. It was Horace Walpole, himself regarded as the prime minister of taste, who called Burlington the Apollo of the Arts, a description based on the Earl’s activity as a practitioner and patron across a very wide range of cultural forms. The decisive phase of his life occurred when he took a Grand Tour in 1714–15, which created in him an enduring obsession with Italy, and was followed by a further trip to the south in 1719, which was designed chiefly to increase his understanding of Antonio Palladio’s villas in and around Vicenza. This experience underlay his own practice as an architect, which constitutes the main ground for continuing scholarly interest in his career. However, he took a keen interest in landscape gardening, music, literature and the fine arts generally, including painting, sculpture, and furniture.

Yet, for all his contacts with the wider world, much of his life was actually spent at his three main estates in England. His country seat was at Londesborough in East Yorkshire, while he owned land in other places dotted around the county. This meant that he was one of the leading figures in York society, exercising considerable electoral influence in the region. More important in terms of the arts were Burlington House in central London and Chiswick Villa on the outer fringes of the city, in a semi-countrified village close to the Thames that had not yet become a suburb. Most of the Earl’s professional activities radiated out from these two locations.

From his youth, Burlington picked up a clutch of offices, honours and distinctions. By the age of twenty-one he was Lord Treasurer of Ireland and a member of the Privy Council in Dublin. In effect these were sinecures that did not require anything so time-consuming as attendance in person or even much by way of working at home. Slightly more significance attached to his appointment as Lord Lieutenant of both the East and West Ridings of Yorkshire. These roles carried with them political patronage, as those who held them had a big say in the choice made by the Lord Chancellor of justices of the peace, the individuals charged with seeing that the law was upheld at a local level. In 1722 Burlington was elected as a Fellow of the Royal Society: even if he did not inherit the scientific gifts of his great forebear, he followed others with architectural talents such as Christopher Wren and Robert Hooke in promoting the study of natural philosophy and mathematics. Two years later he was admitted to the comparatively new Society of Antiquaries, where his credentials were unchallenged. Despite his standing in the world of virtù he never joined the Society of Dilettanti, probably because its reputation, deserved or not, as a group of bibulous libertines did not appeal to someone of his staid personality. In 1729 he was appointed to the English Privy Council, in 1730 he was installed as a Knight of the Garter, and a year later he was given a minor position at Court.

Up to this point, Burlington’s career had seemed to represent the acme of success in respectable fields. Everything changed in 1733, when he broke with the Walpole government, partly out of pique (he may have expected, unrealistically, to be offered the post of Lord Treasurer), and partly because of the general hostility towards the government caused by Walpole’s unpopular attempt to levy a range of excise duties. He did not become an active leader of the Opposition movement that grew up, as did many of those who like Burlington had encouraged the work of Alexander Pope. Still, the Epistle addressed to him by the poet in 1731 gives hints that he was not a natural ally for George II. At all events, he gave support to a Tory candidate during a fiercely waged election for the Yorkshire seat in 1734, taking a stand against the ministerial Whigs who toed Walpole’s line. Attempts in recent years to suggest that the Earl was secretly a Jacobite all along have so far not found favour with most scholars.

Burlington had a relatively short career as an architect. He began with a small building he added at Chiswick, originally a Jacobean mansion that the first Earl had bought in 1682. After this he devoted increasing attention to the site, and following the destruction by fire of an entire range in 1725 he set about constructing a new villa alongside its predecessor. The design, completed by 1728, was modelled fairly strictly on Palladio, except for the introduction of an octagonal dome to replace the more conventional circular kind. Equal attention was given to the gardens, landscaped in the 1720s and 1730s by Charles Bridgman and William Kent, with an input by Pope of some undefinable scope. Meanwhile the Earl had carried out extensive alterations to Burlington House, which had been purchased by the first Earl around 1666. At first he drew on the Baroque-flavoured architecture of James Gibbs before settling on Colen Campbell, who was more in tune with the prevailing Palladian taste. It was Campbell who was mainly responsible for the new look given to the site in Piccadilly. The house stood at the heart of a large development that also included an area behind the mansion where the Earl made his own contribution to the designs. The surviving buildings are located in streets that bear names expressing family connections, for example Burlington Gardens, Cork Street and Savile Row. “Savile” comes from the maiden name of the peer’s wife Dorothy Savile, a daughter of the Marquess of Halifax, whom he married in 1721. She brought to the union her wit, skill in drawing and painting in crayons, shared interests in music and drama, connection with the Court (where she would serve as a lady of the bedchamber to Queen Caroline), and of course a considerable fortune.

For a while Burlington carried out other architectural commissions, of which the most prominent were his stately dormitory for Westminster School (an establishment then operating as a nursery for the British ruling class), and a more elaborate design for the Assembly Rooms at York, in effect his home town outside the capital. He had acquired a fine collection of drawings by Palladio and Inigo Jones among others, which inspired him to prepare further plans, including an ambitious scheme for a new set of buildings to replace the mouldering Houses of Parliament at Westminster. But in the mid 1730s, perhaps in consonance with his new vein of opposition in politics, he ceased to pursue his own practice. Rather, he took on for the rest of his life the role of an unofficial arbiter of national taste, advancing the careers of protégés such as William Kent, sponsoring magnificent publications such as Kent’s volume on Inigo Jones and Isaac Ware’s edition of Palladio, and enlarging his fine library and collections. He died at Chiswick on 3 December 1753 and was buried at Londesborough.

He is famous for the practical help that, unlike many showy patrons, he gave to those working in the arts. Soon after George Friderick Handel arrived in London at the start of his long residence in Britain, the composer was given lodgings in Burlington House—and stayed there for three years. Burlington brought back from Rome three musicians who played in theatre orchestras performing Handel operas. He was a founding director of the Royal Academy of Music in 1719, and would remain a supporter of Handel until the events of 1733 left him aligned in the Opposition with the Prince of Wales—the politics of opera meant that he was thus attached to an alternative camp favouring Giovanni Bononcini. William Kent was also a house guest at Burlington’s mansion for much of his life in the capital, while John Gay enjoyed a shorter stay as a house guest. Meanwhile, Pope paid frequent visits to Chiswick, and was offered land on the Burlington estate in 1718 to build a town house. He declined the offer with gratitude, as the home that the poet went on to erect at Twickenham better suited his needs and his finances.

The Italian writer and adventurer, Francesco Algoratti, once spoke enthusiastically to Frederick the Great of Prussia about the Earl as “the restorer of true architecture.” His name was known throughout Europe, even though he did little by way of self-advertisement. Chiswick House and Gardens are now run by a trust and open to the public. Another fixture on the London skyline is the government-owned Burlington House, though it is much altered externally and internally. The learned societies which have enjoyed accommodation in the front courtyard since the Victorian age are now required to pay an astronomic rate demanded of commercial property in the neighbourhood of Piccadilly, and they may soon have to depart. However, the Royal Academy of Arts survives in the main building, and the annual exhibition held in its galleries provides a reminder that the site has played a central role in the culture of London since the days of the third Earl.