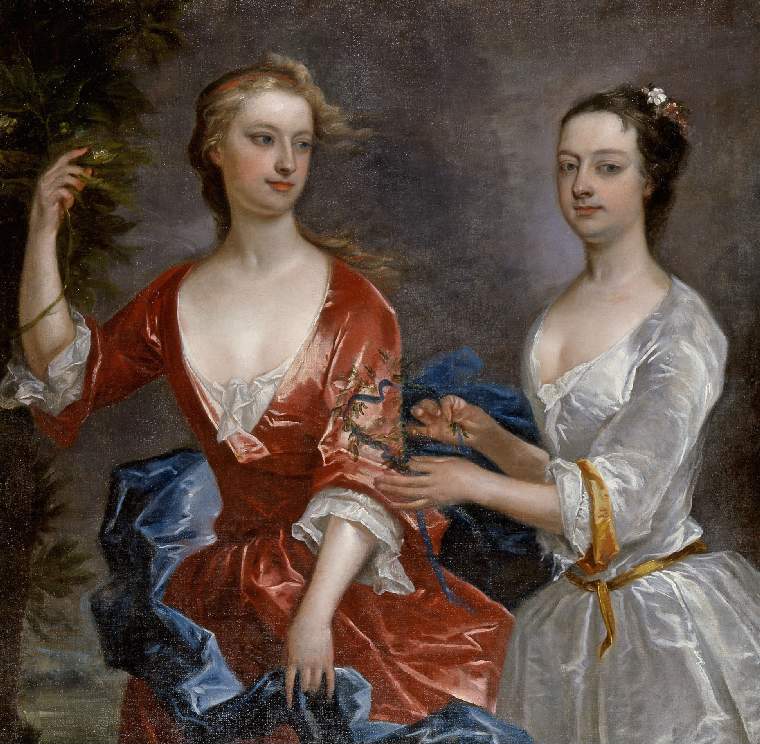 Martha Blount is most commonly remembered for her links with literary and cultural figures such as Alexander Pope, Jonathan Swift, the Countess of Suffolk, Lord Bathurst, Dr John Arbuthnot, Charles Jervas, and Ralph Allen. She was a member of the Catholic gentry from an old family based at the Tudor mansion of Mapledurham, five miles from Reading on the River Thames. Here she grew up as the younger daughter of Lister Blount and his wife Martha, who came from the Englefield family of Whiteknights. These locations lay quite close to the childhood home of Alexander Pope, and the poet may have met Martha along with her sister Teresa (1688–1759) as early as 1707, when the younger girl was seventeen. She was the goddaughter of John Caryll (1667–1736), also a relative of the Englefields, to whom Pope would address The Rape of the Lock(e) in its various incarnations from 1712. These links derived from several alliances between the Blounts and the recusant families of southern England. A small pool of qualified matrimonial candidates within this community limited the choices of women especially. One consequence was that many daughters were sent to French convents for their education and in some cases to take the veil. In the case of the Blount sisters, their prospects were further impaired when their father died in 1710, which in time led to stringent household economies.

Martha was born on 15 June 1690. From girlhood her intimates generally referred to her as Patty. Both sisters were educated at a nunnery In Paris, founded in 1634, where previous members of the Blount family had taken their vows. They were taught by Elizabeth Ann Meynell, who served in the convent for almost sixty years from 1679. A reminder of home would have come with the presence of their aunt Helen Mary Englefield, a sister of the order between 1694 to 1724, who hoped that one or other might join the convent, writing to them after they completed their studies, “since you are not yet fixt in Babylon, Ile stll hope to see you on Mount Syon” (the community was dedicated to our Lady of Sion). However, neither girl felt any call to the religious life, and indeed Teresa was already exhibiting a fondness for worldly pleasures that caused a friend to realise that “her unanimated hardships abroad” could not support her “uninterrupted flow of spirits.” Martha was always much more quiet and shy, but she too enjoyed the company of witty and educated people in high society. Both sisters were members of a group of young Catholic gentry who exchanged messages cast in the language of highflown French romances. Another taking part in these high spirited literary games was their near contemporary Arabella Fermor, who would shortly achieve unexpected notoriety as the model for the heroine Belinda in The Rape of the Lock.

Together the young Blounts began to move in polished circles around London. This milieu is brilliantly evoked in one of Pope’s finest short poems, an “Epistle to Miss Blount, on her Leaving the Town, after the Coronation” (1714), addressed to Teresa. Their youthful appeal is caught by Jervas in a joint portrait he executed around early 1716, perhaps under Pope’s direction. The artist complained that the poet expected him to make them “as beautifull upon Canvas as he has done upon paper.” At this stage the poet may have been more attracted to the elder of the two young ladies, who had become what gossip columnists used to call a vicious socialite. However, his affections gradually turned more to Martha, who equally possessed considerable power over men in her youth, as Valerie Rumbold has pointed out. Both seemed to have excellent marriage prospects; but the outlook soon darkened. Problems about the family finances became more urgent in the wake of anti-papist measures that the Hanoverian government introduced after the Jacobite rising of 1715/16. Another factor was the marriage of their brother Michael (1673–1739), who inevitably claimed the lion’s share of the money available. John Gay wrote in March 1716 of their move to London: “The trees of Windsor Forest shall no more listen to the tunefull reed of the swain & no more Beeches shall be wounded with the names of Teresa & Patty … [who] too are forced to leave the Groves of Mapledurham her Brother having forsaken a Mother & sisters & taken to himself a wife.” John Caryll had helped to arrange this marriage and he seems to have hoped that Pope would wed his goddaughter. But the poet recognised that it could never be, even though his feelings for Martha, and his admiration of her qualities, were greater than for any other woman.

The sisters went to live with their mother in the West End of London, for some time in Bolton Street, off Piccadilly, and after this in Welbeck Street, where eight houses or fewer had been built by the time of their move. This was part of the fashionable new development created by the Earl of Oxford, and the locality abounded with his disciples the Harleyites, who had many links to the Pope circle. The poet himself attempted to put Martha's finances on a more stable basis, and even invested on behalf of the Blounts in the South Sea Company, with dubious success. Away from the centre of town, Martha spent many summers in the vicinity of Richmond, Kew, and Petersham, within easy reach of the poet’s home at Twickenham. In the 1720s and 1730s she kept up close relations with many persons connected to Pope, including Hugh Bethel and his sisters; Bathurst; and Henrietta Howard, Countess of Suffolk. In addition, she subscribed to the translation of the Odyssey (1725) and, with Teresa, to the poems of John Gay (1720).

As time went on, Pope became estranged from Teresa, who may have been involved with a married man. However, Martha remained his most trusted confidante, and thirty-six letters survive between the pair. Among them are some of Pope’s finest pieces of writing, on topics of morality and on the romantic landscape scenery that Martha greatly loved. Even he became frustrated at times by her reluctance to break free from the grip of her family, including her brother and sister. He once wrote to Bethel, who had given her help on an annuity payment due to her, “I wish you'd come, & join with me in forcing her to do herself right. I am tired with good Wishes for her, they are so ineffectual: her Virtues & her Weaknesss go hand in hand; I don't know which are greater: but every one who is her friend on account of the first must frett at the latter, since nothing can do her good for want of her own Cooperation.” But he admitted elsewhere that she “never neglects a Friend, ill, or absent.” Her depressive states may have been made worse by persistent ill health, on which she was able to consult Dr. Arbuthnot.

Through the ups and downs of her life, Pope never ceased to honour Martha in verse, for example in the beautiful lines he wrote “To Mrs. M.B. on her Birth-day,” at first circulated privately in 1723. It is hard to think of many more eloquent tributes in the English language, especially as it forbears the entire idiom of romantic poetry. Contemporary gossip suggested that a sexual relationship underlay their friendship, but there is no convincing evidence of this. Late in life, in 1743, an embarrassing quarrel broke out at Prior Park in Bath, when Pope was staying at the home of the entrepreneur Ralph Allen, a dedicated Protestant and Hanoverian. Martha, who had come to the West Country with her friend Lady Gerard, also a Catholic, irritated Allen when she wanted the use of his coach to take her to Mass. Meanwhile his wife grew suspicious of early morning visits that Martha made to Pope’s room, and a “mutual dissatisfaction” sprang up between the two women. The resulting estrangement caused great pain to Martha, as ever a sensitive and shrinking individual. Also present was the oleaginous cleric William Warburton, whose behaviour led Pope to warn Martha about him: “I should not wonder if Listeners at doors should open Letters. W. is a sneaking Parson.” As Rumbold observes, “Warburton remained her enemy and circulated various anecdotes impugning her integrity, particularly through the materials he provided for Owen Ruffhead's The Life of Alexander Pope (1769).”

Pope remained loyal, and soon afterwards he began to make arrangements to buy the lease of a London town house in Berkeley Street that Martha was to occupy. After he died, she acquired the lease in 1746 and lived there for the rest of her life. Pope had left her £1,000 outright, as well as a life interest in his residuary estate and most of his household goods and chattels. It is a striking testimony to his regard for Martha, although the bequest offended his half-sister Magdalen Rackett. In her old age Martha may have grown fat, but even Horace Walpole, who wrote some nasty comments about her, admitted that she still had the bright blue eyes celebrated by her great poet. She now had much greater independence, although she had to lend small sums of money to her wayward sister at regular intervals. There was also gossip about Teresa, in this case with more apparent justification. Dark hints, not fully explained—probably the married man at least, possibly living as a kept woman, possibly a succession of men—certainly something that Pope and others regarded as shameful. She died on 7 October 1759, when a Catholic chaplain told Martha, “Tho’ your Sister’s long infirmities rendered her death, in some sense, not untimely, yet your great tenderness for her must … make it very sensible to you.” This is one more testimony to Martha’s loyalty and good heart. Her deepest affections now lay with her nephew Michael, his wife Mary Eugenia and their child May Martha, usually called “little Patty.” She died aged seventy-three on 12 July 1763, leaving the bulk of her estate to Michael. Her burial took place alongside the grave of her sister, at St. Pancras churchyard, a favourite resting place for the Catholic community: unfortunately this was closed in 1854 and the corpses were cleared away when St. Pancras railway station was built in the 1860s.

Martha Blount had been the recipient of the Epistle to a Lady (1735), today the most debated of Pope’s Moral Essays. In the last forty lines of the poem, he conveys a sense of ideal womanhood through her unnamed presence. She embodies the mild and serene qualities of the moon with its “sober light,” showing good temper, cheerfulness, concern for others, self-control, and the ability to cope unobtrusively with the daily problems of domestic life. She can even “love a Sister’s charms,” which may have been hard sometimes where Teresa was concerned. These are not the virtues to which a modern woman will necessarily aspire, but few in Martha’s lifetime would have disdained to accept the attributes gifted to her by Apollo of “good Sense, Good-humour, and a Poet.”