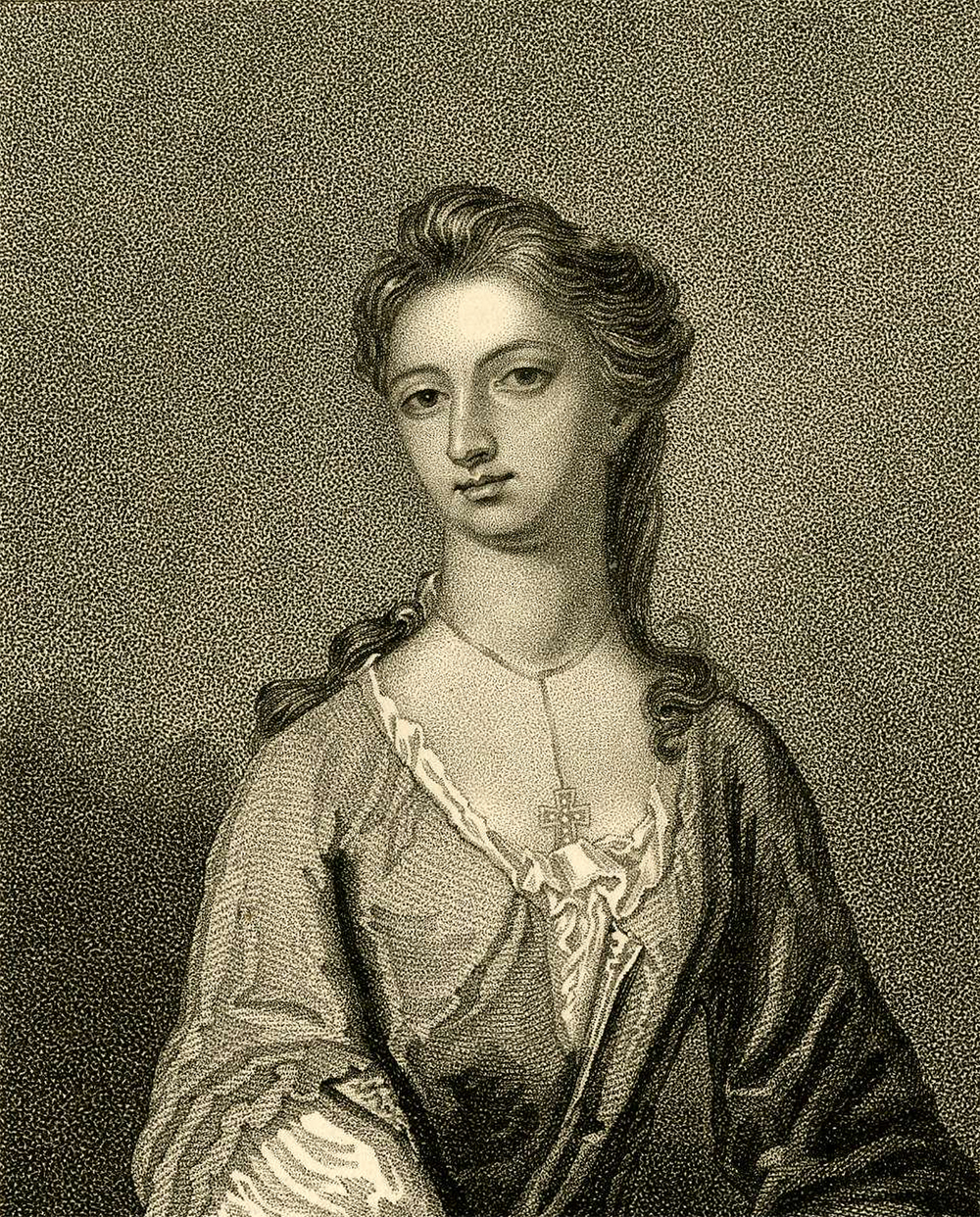 An English gentlewoman, sometimes known in her youth as known as “Belle Fermor,” whose name has survived owing to her casting by Alexander Pope in the role of Belinda, heroine of The Rape of the Lock (1712, 1714. 1717). Her background lay in a well established Oxfordshire family, with connections to other Catholic gentry along the Thames Valley, many of them familiar to Pope. Her father was Henry Fermor (d. 1703), Her mother, Helen or Eleanor Browne, had roots in Berkshire, with a home at Great Shefford, later acquired by Pope’s first patron, Sir William Trumbull. Arabella was the eldest of eight sisters, along with two brothers. She came from one of the most firmly established Catholic families in southern England. The name was pronounced “Farmer,” and this is the spelling sometimes found. They acquired a home on the banks of the Cherwell in the early seventeenth century, before moving to Tusmore near Brackley. Since Arabella’s time the house has been rebuilt and new gardens created to replace those in the formal style she would have known. While still a small child, Arabella was taken to the English Convent in Paris by her grandmother Lady Browne (the aunt of Sir George Browne, caricatured in The Rape as “Sir Plume”), where she resided until 1704. Following her father’s death, she came back home in company with Lady Browne.

In her late teens Arabella took part in a circle of young Catholic women and men with a taste for fanciful correspondence in the style of French gallantry, seen in the romances of Madeleine de Scudéry. Among the group were Teresa and Martha Blount, girls of roughly the same age as Arabella, from Mapledurham in Berkshire, with whom Pope was already acquainted. The debutante in high society also achieved notice as a reigning toast of London, earning tributes among “The Celebrated Beauties” in poems of the day. She actually makes an appearance in a volume of the Miscellanies put out by the leading publisher Jacob Tonson senior in 1709, where Pope made his debut as a poet. In another set of verses, her charms are described with almost voyeuristic delight in the motions of her “Neck,” with unashamed praise of “Her Snowey Breasts those lovely Mounts” that “with surprizing Pleasure seize our Eyes.” This anticipates in a way the lines in Canto II of the Rape, where we are told that in the presence of Belinda “ev’ry Eye was fix’d on her alone,” as “on her white Breast a sparkling Cross she wore,” a slightly more oblique and discreet mode of compliment. Elsewhere, Arabella is described as “Tho’ Gay, yet Modest, tho’ Sublime, yet Sweet, / Fair without Art, and graceful without Pride.” Pope’s more astringent satire qualifies this idolatrous portrait of his leading lady.

It was in 1711, probably at the seat of the aristocratic Catholic Petre family, Ingatestone Hall in Essex, that the notorious “rape” of a lock of her hair is supposed to have taken place, with the violator clearly recognizable as Robert Petre, the seventh lord. The real life Baron would marry a fifteen year-old Lancashire heiress, but succumbed to smallpox in 1713, still aged barely twenty-three. A year later Pope dedicated the expanded form of his poem to Arabella and also referred to her as Belinda in some shorter poems. Within months came her wedding to a member of another old recusant family from Berkshire, Francis Perkins (1683–1736): Pope wrote to Martha Blount around the end of November that he had only just heard of “Mrs Fermor’s being Actually, directly, and consummatively, married.” Mysteriously, he referred to a guilty secret of the couple, shared by “their Accessories at Whiteknights,” that is, the bride’s relatives, the local Englefield family with links to the Blounts. Afterwards Pope printed a letter of compliment to Arabella on the occasion, but he may have made this up later. Her marriage portion of £4,500 was a hefty one—though in the previous year the bride of her brother James brought him even more, £6,000. The cruel truth is that if she had resisted marriage much longer, she would have been downgraded from a toast to the lowly standing of an old maid.

So far as we are aware, no subsequent contacts took place between Arabella and the poet who, perhaps to her embarrassment, had immortalised her. This was despite that she lived within easy range of his regular haunts, not far from Reading. She had six children, a daughter, also Arabella (d. 1723), and five sons, who squandered away the family fortune. Following the death of the youngest son John in 1769, the Perkins estate passed to distant relatives and fell into ruin. Arabella herself maintained an unobtrusive way of life after her brief moment of fame.

Arabella had her portrait painted, probably by a certain W. Sikes: a version survives in the Bodleian Library, Oxford. She is shown in a blue dress, wearing a cross round her neck, and the picture seems to allude to her status as Belinda in the poem.

For the context of her life, see Valerie Rumbold, Women’s Place in Pope’s World (Cambridge, 1989).