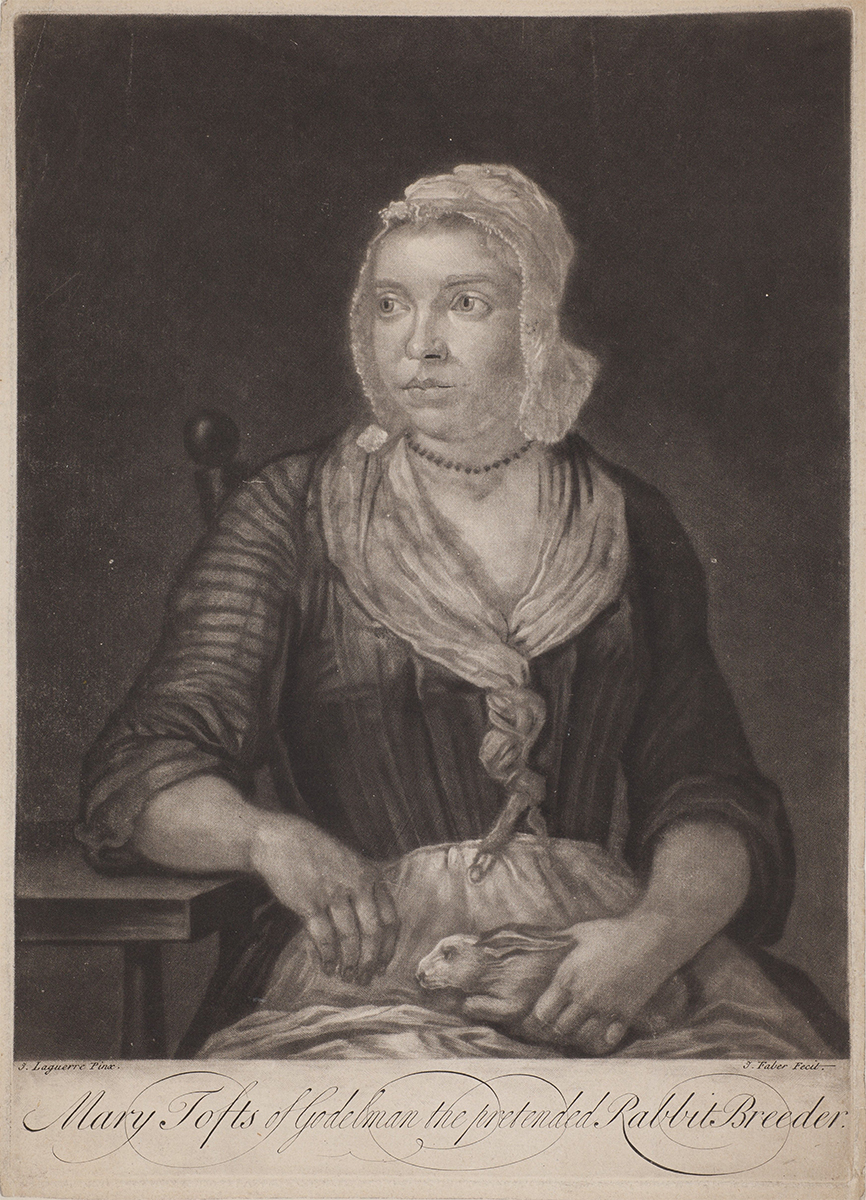 Mary Toft captured the attention of the nation for a few months in late 1726 and early 1727. The shutters soon went up on her brief window of fame, and it is only in recent years that she has reclaimed extensive notice from historians. Her case has been explored for the light it sheds on obstetric practice, medical knowledge, family relations, hoaxes, and popular beliefs. Curiosity waned in her own lifetime once investigations had exposed the nature of the deceit in which she had been involved: today it is precisely the fraud that interests us, as it reveals the kind of ideas that were prevalent in the community, and the tools available for uncovering the truth. Occasionally she appeared in folklore as the Rabbit Woman, a name drawn from her extraordinary claims of having given birth to multiple monstrous progeny. She even crops up briefly in a novel by Hilary Mantel, The Giant O’Brien (1998), the tale of another eighteenth-century “freak.”

Toft was a poor woman and, as often happens, information is sparse on members of the underclass. The demographic and economic circumstances in which she grew up have been examined by scholars, notably Karen Harvey. She was born in 1703 as the second child of John and Jane Denyer at Godalming in rural Surrey, thirty miles from central London. This was a small place with about 2,000 inhabitants when the story of the rabbits surfaced, but it was overshadowed by the nearby market town of Guildford. In the Tudor age it had enjoyed a prosperous wool trade, but increasingly the clothing industry was moving towards the North of England, and by the end of the seventeenth century there was widespread hardship among the labouring classes. This affected Mary directly, because her future husband himself worked as a journeyman clothier. In 1725 a man named John Denyer who may have been her brother was taken into an almshouse catering to the indigent residents of Godalming. When she was seventeen, Mary had married a local man of almost exactly the same age, Joshua Toft, one of eight or more children born to Ann and Joshua Toft. Mary and her husband had two or possibly three children, but only a two-year-old boy survived in 1726.

Mary Toft obviously needed to supplement the scanty household income. However, she was able to earn only a penny a day working for local farmers, especially with the seasonal drop in agricultural employment in the high summer, and she sometimes chased rabbits to provide food for her family. Early in September 1726 she suffered an apparent miscarriage, brought on when she was startled by a rabbit while out in the fields. Over the next few weeks she began to claim that she had actually given birth to a litter of rabbits, with the number involved gradually mounting at a rate that sometimes reached one each day. She managed to convince the local physician named John Howard, who had grown prosperous in his long practice of surgery and midwifery in Guildford. He contacted one of the most prominent figures in the London medical world, Nathanael St. André, a Swiss born former dancing master with few formal qualifications, who had managed to get himself appointed Surgeon and Anatomist to the royal family in 1723. St André came down to Guildford on 15 November and was duped into believing that he had witnessed the aftermath of a further delivery of a baby rabbit. Seemingly persuaded, the fashionable practitioner returned to London and on 20 November a German surgeon also with links to the royal household, Cyriacus Ahlers, was sent to Guildford, presumably to confirm St. André’s findings. Ahlers was more sceptical, and in order for further examinations to be carried out Mary was taken to London on 29 November.

From then the complicated and sometimes farcical events in Toft’s story were played out in the capital. She was lodged in a bagnio in Leicester Fields, quite close to key sites in central London such as Charing Cross and Covent Garden. A bagnio was literally a bath-house, but it also offered a variety of functions associated with what is now called health and wellness, including sauna-like massaging treatments. Unquestionably some bagnios provided sexual services, but this may not be true of the lately renovated property rented by Roger Lacy in Leicester Fields. The poor country girl found herself suddenly transported to one of the most fashionable areas of the metropolis, with the residence of the Prince of Wales at the head of the square. Apart from an illiterate woman from Godalming who acted as her nurse, she was alone in the city, surrounded by an elite group of the medical establishment. Among those now managing the enquiry into her claims were Sir Richard Manningham, perhaps the most renowned of the man-midwives in London, and his rival James Douglas, FRS, FRCP, Physician Extraordinary to Queen Caroline, a learned polymath immortalised in a line from The Dunciad that glances at his part in the Toft affair: “Douglas lends his soft, obstetric hand.” Others who showed up at the bagnio, often to poke and prod the doubtless terrified young woman, were Claudius Amyand, Sergeant-Surgeon to the King; John Arbuthnot, famous in medicine, science and literature, who came in company with the courtier Lord Hervey; and John Maubray, known as “the Sooterkin doctor” after he claimed to have attended the delivery of the monstrous specimen so named. Wikipedia tells us that it was “a fabled small creature about the size of a mouse that certain women were believed to have been capable of giving birth to” and was considered factual by some physicians of the age.

Like the rest of London, agog with the subject, these experts were divided on whether to give any credence to what Toft claimed.  Some of them wrote accounts to support their view, whether pro or con. For a few days the outcome of all the tests and inquisitions remained uncertain.  A justice of the peace arrived to warn her of the threat of prison if she did not confess to her fraud. By now the tally of births had mounted to seventeen; but there would be no more. On 7 December she finally admitted to the fraud, faced by the daunting presence of two of the biggest wheels in the entire nation, the Duke of Montagu and the Duke of Richmond (who happened to own the largest mansion in Godalming), accompanied by the scarcely less fearsome pairing of Manningham and Douglas, both now sure of her guilt. The interview continued on the following day with the befuddled Toft offering conflicting stories of how the hoax came into being. Around the same time, a group of locals gave depositions before Lord Onslow, a Surrey magnate with good connections to the Court. These implicated Mary’s husband Joshua in setting up the fraud. When the testimonies were hurriedly conveyed to London, they may have sealed the victim’s fate. Soon after, she was charged with being a “Notorious and Vile Cheat,” and committed to Bridewell prison, designed to house the disorderly poor, and in practice the receptacle for many of the city’s whores, vagrants, waifs and strays.

It turned out that the case against Toft did not rise to the standards required to justify a charge of fraud, since she had not gained any benefit from her pretence, and it failed to display the use of some “artful Device” calculated to deceive a person of ordinary prudence. After four months in custody, she was freed without charge in early April 1727, by which time she had ceased to be the at the centre of the hottest story in town. Howard, who had been accused of complicity, was also let off the hook, perhaps because he could not have abetted a fraud which did not take place. The episode gradually faded from public consciousness. Toft lived until 1763, eventually widowed but largely in safe anonymity.

In her fifteen or so weeks of fame, it was very different. Public interest was at a fever pitch for a time even after her confession. The topic proved “too tempting for the wits and hacks of Grub Street,” as Dennis Todd puts it. There ensued a deluge of publications in almost every literary and graphic genre with which London was inundated for weeks. An especially famous print is an early work by William Hogarth, Cuniculari: or The Wise Men of Godliman in Consultation (the title means the rabbit’s burrows, but there may be a pun on the female birth canal). It shows major figures in the episode, including St. André (labelled in the key “The Dancing Master or Præternatural Anatomist”); Manningham (“An Occult Philosopher searching into the Depth of things”); Maubray (“The Sooterkin Doctor astonish’d”); Howard (“The Guildford Rabbit Man Midwife”); Joshua Toft (“The Rabbit getter”; and the nurse or “Rabbit dresser. Mary herself is described as “The Lady in the straw”; despite her central position in the design, lying on a bed with her legs spread, she is the only one with her face turned away as she gazes up to the heavens. A dozen or more baby rabbits scamper around the floor beside the bed. The print illustrates Hogarth’s ability to extract satiric capital from a topical issue, familiar to the public, and in this case to bring out the cruelties that underlay the medical and legal response to Toft’s hoax.

Among all the writings that emerged, the most skilfully put together is The Discovery: or, The Squire turn’d Ferret, an “Excellent New Ballad” in 22 quatrains, and certainly none of them is as amusing. The poem was composed by Alexander Pope, possibly with some assistance by William Pulteney, and it exhibits the talents of its author for quasi-demotic verse, skewering in particular St André, the medical man whose career was most lastingly damaged by his credulous behaviour in the affair. Not many people emerged very well from what had happened, but it was Mary herself who suffered most. Almost certainly illiterate, and quite likely encouraged by her husband and his family (her mother-in-law was a midwife), she did not possess the inner resources to stand up against her inquisitors—as who would have in those circumstances?

There are two excellent full-length studies. Karen Harvey, The Impostress Rabbit Breeder: Mary Toft and Eighteenth-Century England (Oxford, 2020) supplies the most complete account of Toft’s story within the context of local and national events and attitudes. Dennis Todd, Imagining Monsters: Miscreations of the Self in Eighteenth-Century England (Chicago, 1995) explores the literary response, and relates the case to parallel instances in Scriblerian satires by Swift, Pope, and Arbuthnot. For the obstetric background, see Lisa Forman Cody, Birthing the Nation: Sex, Science, and the Conception of Eighteenth-Century Britons (Oxford, 2005), Chapter 5, “Imagining Mothers.”