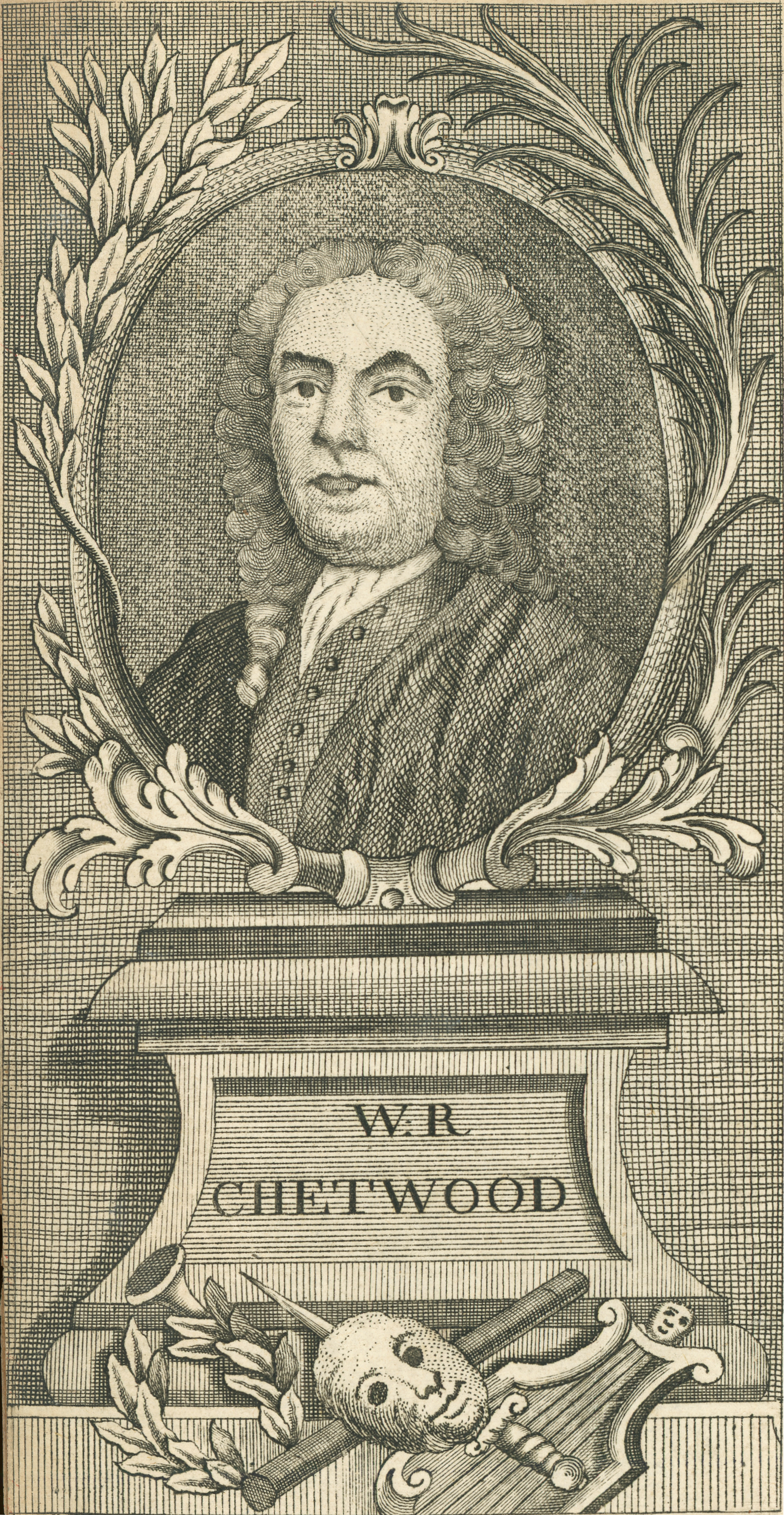 Chetwood, Mr. William Rufus.—This Author for some Time kept a Bookseller's Shop in Covent Garden.—He was also for twenty Years Prompter to Drury Lane Theatre, and in that very laborious and useful Office was esteem'd to have great Excellence.—Tho' no Actor himself, yet, from being so conversant with the Stage, and with the various Manners of different eminent Performers, he became no bad theatrical Instructor; and to the Pains he has taken in that Business some condierable Actors now living, perhaps, stand indebted for Part at least of their early Approbation.—I have in particular heard it asserted, not only by Mr. Chetwood himself, but others, that Mr. Barry received his first Rudiments of theatrical Execution from this Gentleman, as did also a Lady, who has for a few Years past stood in high Estimation with the Audiences of Dublin, viz. Mrs. Fitzhenry, formerly Mrs. Gregory.

Mr. Chetwood by his first Wife had a Daughter, who was bred up to the theatrical Life, and was married to one Mr. Gemea.—His second Wife, who I believe is still living, was a Grand-Daughter of Mr. Colley Cibber.—Mr. Chetwood himself also is living, and I think in Dublin, but in a very advanced Age.—He has wrote some Pieces in the Novel Way, and a Work call'd A General History of the Stage, which however has very little, or rather indeed no Merit.—He has also written the following dramatic Pieces,

—David Erskine Baker, The Companion to the Play-House: or, an Historical Account of all the Dramatic Writers (and their Works) that have Appeared in Great Britain and Ireland (London, 1764)

For the Relief of Mr. Chetwood, late
Prompter at the Theatre-Royal in Drury-Lane, and now
a Prisoner in the King's-Bench.
At the Theatre-Royal in Covent-Garden,
Monday, Jan. 12, will be presented a Comedy, call'd
The Old Batchelor
The Part of Fondlewife, by
Mr. Cibber, Senior;
And the Part of Laetitia, by Mrs. Woffington.
All the other Parts as usual.
With Entertainments, as will be express'd in the Great Bills.
To begin, exactly at Six o'Clock.

A PREFACE is Part of the Habit to a Book, and no Author can appear fulldress'd without it: 'Tis a Cockade to an Officer, a Nosegay to a Lawyer, a Patch or a Fan to a fine Lady, or, a Ribband to her Lap-Dog.

If I should tell my Readers, I am prevailed upon with great Intreaties from my Friends to publish this Piece, I should embark with a Falshood (for it is my own Free-will, Act and Deed); and I would willingly have my Readers believe I publish nought but Truth. My Cargo is genuine, and I have taken up but little on Credit.

If the good Reader should find better Scraps of Rhyme than my own (which I presume will not be over-difficult), I have given them distinguishing Marks, that there may be no Doubts on that Account.

The numerous Notes I have squeezed in, are meant to divert; if I lose my Aim, I shall content myself with considering, I may be but one among ten thousand that have been mistaken.

I have unnumbered Thanks to many in this Kingdom, and in particular to a young Gentleman whose Good-nature has been indefatigable in my Interest. The other a Gentleman eminent in the Law, who has made my Cause his own. It gives me great Concern I am not permitted publicly to own their unbounded Goodness and Generosity, since such Sterling Friends are but seldom met with by Wretches in Misfortune.

I am Unfortunate I own, but (as Oroonoko says) not ashamed of being so. I bear all with Patience and Chearfulness; which I find has occasion'd the following Flight of Poetry from a Friend. I know Authors often write to themselves; yet I'll assure you, on my Veracity, it is not the Case here; tho' I must allow a little Vanity in my Composition makes me willing to insert it.

SAY, fair Content, lov'd Goddess, say,
How shall I find thy soft Retreat;
Where shall I seek thy Halcyon Seat,
Or trace thy sacred Way?

Love pointed out a pleasing Scene,
Where nought but Beauty could be found,
With Roses and with Myrtles crown'd;
And nam'd thee for its Queen.

Delusion all! a specious Cheat!
At my Approach the Roses fade;
I found each Fragrance quite decay'd,
And curs'd the fond Deceit!

At Courts I've sought, where Splendor shone,
Where Pomp and gilded Cars reside;
'Midst endless Hurry, endless Pride;
But there thou wast unknown.

Yet in the Captive's dreary Cell,
Lodg'd with a long-experienc'd Sage
(With thee, thou CHIRON of the Stage)
The Goddess deigns to dwell.

Integrity, and Truth serene,
Have eas'd the Labours of the Breast,
And lull'd the peaceful Heart to rest,
'Midst Perfidy and Pain.

A Soul, like thine, disrob'd of Guile,
In native Innocence elate;
Above the keenest Rage of Fate,
Can greet IT with a Smile.

I would wish with Horace,

To pass declining Years without Reproach;

But that I find impossible; Falshood and Fraud are the Products of the World, and grow spontaneous. But no more than this; I forgive my Enemies, and shall ever cherish the Memory of my Friends. I must ask Pardon for naming Mr. Barrington in this Theatre, and Miss Bellamy in Covent-Garden; the Goodness of them both have often eas'd an aching Heart.

Mr. Chetwood was twenty years Prompter to the Theatre Royal in Drury-lane, he was the friend of Sir Richard Steele, Booth, Wilks, Cibber, and Mrs. Oldfield; he was the Author of several entertaining Works, particularly Boyle's and Vaughan's Voyages, and a man of most amiable character; notwithstanding which, he died almost destitute of the common necessaries of life, after a confinement of sixteen years in the Fourt Court Marshalsea, Dublin.—Lloyd's Evening Post 1774, November 16–18, 1768

CHETWOOD, WILLIAM RUFUS. First opened a bookselling business under Tom's Coffee House, in Covent Garden, in 1719. His first known publication was 'The State of the Case between the Lord Chamberlain and Sir Richard Steele,' a pamphlet provoked by the temporary suppression of Drury Lane Theatre, and the suspension of the licence which had been granted to Steeele a few years prviously. Early in 1720 Chetwood moved to Cato's Head in Russell Street, where he conducted his business for another two years, when he sold the shop, together with its stock, to Roberts, and himself became prompter at Drury Lane theatre.

The 'D.N.B.' states that he opened at Tom's Coffee House in 1720, and at Cato's Head in 1721; but a newspaper advertisement of Jan. 1, 1720, gives his address then as Cato's Head, so that it must have been in the previous year that he first set up as a bookseller.

CHETWOOD, WILLIAM. In addition to the addresses mentioned, at Covent Garden and Russell Street, one can give "the Sword and Cross, over against Exeter Exchange in the Strand," which occurs on the imprint of an anonymous poem, attributed to Dean Swift published in 1713. This is many years earlier than the date given by the 'D.N.B.' when it was stated that Chetwood was first heard of. It might be briefly mentioned that Chetwood wrote a 'General History of the Stage' (1749) and other works; among them were four dramatic pieces. An imprint on one of his novels 'Adrastus and Olinda' (1741) gives the author's address as at the Golden Ball in May's Buildings, St. Martin's Lane. The four plays referred to were published by J. Roberts, who apparently succeeded to Chetwood's bookselling business about 1720 ('D.N.B.').