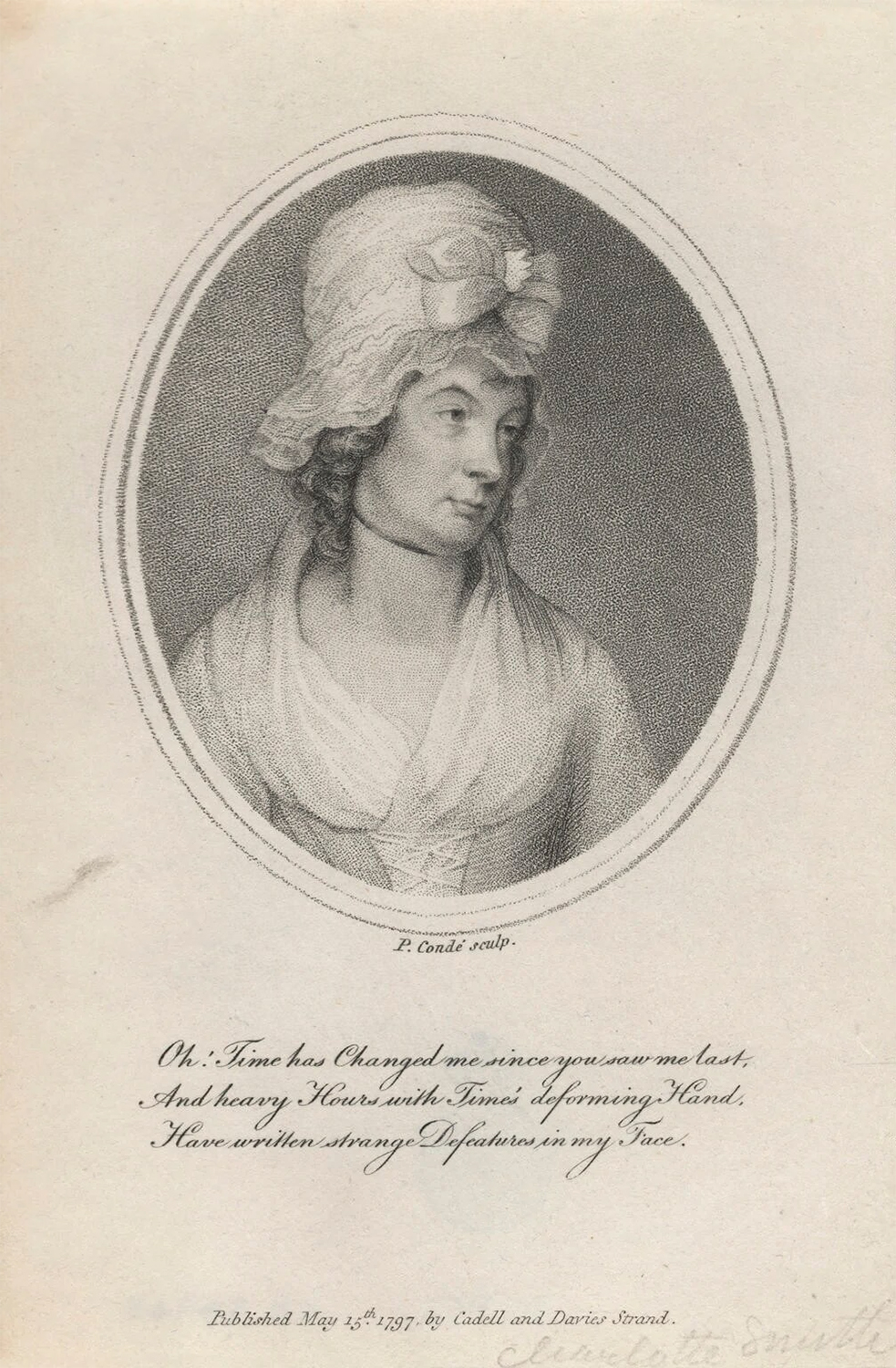 Arguably one of the most underrated authors in British literary history, Charlotte Smith pioneered the realist novel, rivalling Frances Burney in her own time as the most admired novelist of the age and influencing Jane Austen, Walter Scott, and Charles Dickens. Smith was also a major poet whose Elegiac Sonnets (1784) was republished throughout her life, influencing Wordsworth. Her posthumous long landscape poem, Beachy Head (1807), is comparable to Wordsworth’s best verse in its rejection of poetic diction and realistic depiction of both the land and its people. Smith exemplified the hard-working professional writer of the late eighteenth century, a best-selling author who nonetheless labored incessantly throughout her career just to keep her large family above water.

Smith’s early life promised a quite different and much easier life. She was born in London in 1749, the eldest daughter of a wealthy landed gentleman Nicholas Turner who had estates in Surrey and Sussex. When Charlotte’s mother Anna died when she was three, however, Nicholas went abroad, squandering his wealth to the point where he saw the need to marry Charlotte at only fifteen to Benjamin Smith, the son of the wealthy Barbados planter and East India merchant Richard Smith. Though designed to become himself a wealthy merchant, Benjamin proved feckless and incompetent, unable to provide for his family and constantly trying to seize Charlotte’s earnings as an author. When Richard Smith died, his fortune of some £36,000 became hopelessly entangled in Chancery, leaving the family without money. Benjamin ended up in King’s Bench Prison for debt where Charlotte stayed with him amidst scenes of despair that she would later recall vividly in her novel Marchmont (1796). Meanwhile Smith and her husband had started a large family with twelve children before their separation.

For Benjamin soon absconded, leaving Charlotte to support the children on her own at various places in south England. Smith turned to writing as a source of income, discovering to everyone’s apparent surprise that she was one of the most talented and marketable authors of her time. As a woman author she at first struggled for acceptance: Richard Dodsley rejected her Elegiac Sonnets contemptuously before William Hayley, then considered a major poet, agreed to be the dedicatee. The commercial and critical success of this volume paved the way for the publication of her adaptation of a collection of legal cases in French, which she entitled The Romance of Real Life. The unexpected success of this book in turn induced the major London bookseller Thomas Cadell to offer her £50 a volume for her first wholly original novel, Emmeline; or, the Orphan of the Castle (1788). Reception of this novel was again enthusiastic, as was the reception of her subsequent Ethelinde; or, the Recluse of the Forest (1789). By the time Smith published Celestina (1789), The Critical Review judged that “In the modern school of novel-writers, Mrs. Smith holds a very distinguished rank; and, if not the first, she is so near as scarcely to be styled an inferior. Perhaps, with Miss Burney she may be allowed to hold ‘a divided sway.’”

Having risen quickly to even magisterial reputation, Smith was now in a position to take chances and develop her generally recognized gifts. In an atmosphere charged by the French Revolution, she wrote a pro-revolutionary novel, Desmond (1792), going to France to get a sense of events on the ground. This work was followed by a second novel deeply critical of the English political, ecclesiastical and legal establishment, Old Manor House (1793), which has remained her most popular and discussed work. Despite the success of both these novels, Smith remained vulnerable. When she published the one-volume novel The Wanderings of Warwick (1794), the bookseller Joseph Bell, who had published Old Manor House, had Smith arrested for failing to fulfil her agreement to publish a two-volume novel. She moved back to Cadell’s firm, again surprising everyone by writing what was viewed as a recantation of her pro-revolutionary views, The Banished Man. This novel followed the struggles of an aristocratic French refugee from Jacobin violence at the outset of the Terror. In Montalbert (1795) she briefly revived the non-political orientation of her early novels, with their sentimentalized heroines. In Marchmont (1796) and The Young Philosopher (1798), however, Smith again launched a scathing critique of the British establishment.

As the result of this critique, the establishment rounded against the one-time celebrated novelist. Reviews of the last two novels particularly condemned her attacks on greedy and dishonest lawyers, blaming this bitter satire on her continuing legal woes with Richard Smith’s unpaid will. Smith’s reputation would never recover from this critique. Throughout the nineteenth century to the present day, Smith has been widely regarded as a novelist who could not separate her private life from her fiction. Oddly, it is a charge leveled most often at women writers. Her novels after Old Manor House have been all but ignored; to this day, there is hardly a single published essay on Marchmont, despite its vigorous experiments with the gothic as the form of social and political critique. In this latter fiction, Smith was virtually inventing the Condition of England novel, using her fiction like Gaskell or Dickens to paint a sweeping and harshly realistic portrait of social injustice and the sufferings of common people. Smith has remained in the shadow of Jane Austen, and often seems valued only to the extent that she foreshadows Austen’s fiction. Yet Smith was a much different and arguably better novelist than Austen in many respects. She marched headlong into the major social issues of her day, covering a geographical and ideological zone far beyond the narrow boundaries of English village life.

Smith exemplifies the artistic achievement of an author who first wrote for money and always had commercial ends in mind. Her friend William Cowper imagined her “chained to her desk like a slave to his oar.” Through all this, however, Smith’s standards of artistry never diminished. The educational writing and poetry of her last years remains of high quality leading to her still admired poem Beachy Head, published shortly after her death in October 1806. Smith was a shrewd and hard bargainer with the leading publishers of her day, including Dodsley, Cadell and Davies, Joseph Bell and Joseph Johnson. From her sixty-three volumes of fiction, poetry and a single unperformed comedy, What is She?, she earned large receipts, opening the way for other woman writers, yet it was only in the last year of her life that she enjoyed any relief from her financial straits. Her estranged husband died early in 1806, freeing up £7000 from the Smith will. The saga of Richard Smith’s disputed will, which was finally whittled to almost nothing by legal fees, would be memorialized in Dickens’s Bleak House. But Dickens also learned from Smith’s innovations as a novelist who showed how to combine gritty detail with imagery drawn from the romance and gothic, creating what Smith herself dubbed “The Romance of Real Life.” In the words of Stuart Curren, Smith’s fiction marks the beginning of “a reconstituted literary realism markedly distinct from that of Richardson, Fielding, and Smollett.” Regrettably, she still awaits a proper revival.