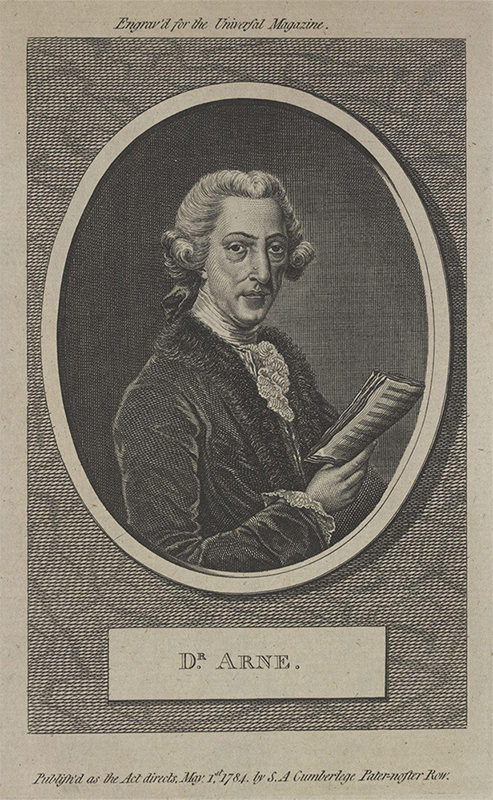 Thomas A. Arne (1710–78), composer, performer and teacher, was born in King Street, Covent Garden, on March 12, 1710. He was the son of an upholsterer and undertaker. With the help of the violinist Michael Festing, Arne overcame parental opposition to his musical aspirations to achieve a significant career in eighteenth-century London and Dublin. It was Festing who taught Arne the violin and helped Arne’s father become reconciled with his son’s musical aspirations. The elder Arne had wanted his son to pursue a legal career, an option unavailable to the younger Arne once he decided to adopt his mother’s Catholic faith. This choice also affected his musical career. As a Catholic, he was prevented from accepting positions at court or in the Anglican Church. Furthermore, he would have faced the prejudice against British performers and composers held by the influential aristocratic class. Continental tastes held sway in the elite London concert series, such as that run by J.C. Bach (1735–82) and K.F. Abel (1723–1787) and in the homes of the social elite. Charles Dibdin (1745–1814) writes that “had not Arne all his life been discouraged, and Handel considered as another Apollo, the fame of the Englishman would have exceeded that of the German” (The Musical Tour of Mr. Dibdin, 1788).

Denied access to the highest realms of musical achievement in the capitol, Arne made his career in the theatres of London and Dublin as a composer, while also composing a variety of vocal works for the summer concerts of the London pleasure gardens. His songs and ballads performed at the pleasure gardens were published in volumes at the end of the summer seasons and gave much pleasure in the homes of Georgian England. Charles Burney writes that these works “had improved and polished our national taste,” adding further that Arne had “formed a new style of his own” (A General History of Music, 4, 1789). In addition, Arne contributed music to nearly one hundred stage works, including incidental music, masques, English operas, and two serious works in the Italianate style: Artaxerxes (1762) and L’olimpiade (1765). Outside of theatrical music, Arne composed 2 Masses, 4 symphonies, 6 concerti, 2 oratorios, 5 Italian odes, keyboard music and chamber music, and numerous songs and cantatas.

Arne began writing for the theatre in 1732 and in March of 1733, his Rosamond was produced successfully at the Lincoln’s Inn Fields Theatre with a cast that included his sister Susannah and his younger brother Richard, both of whom he had taught to sing. Susannah married the playwright Theophilus Cibber (the son of Colley Cibber) in 1734 and took up a contract at the Theatre Royal, Drury Lane. Arne began to supply music for that theatre and this did much to bring him to prominence. In 1737, Arne married the talented soprano Cecilia Young (1712–89) who had previously performed in Handel’s oratorios and Italian operas. Mrs. Arne, as she was now known, performed in some of Arne’s earliest successes at the Drury Lane theatre, including Comus (1738) and The Judgement of Paris (1742). It was the production of Alfred (1740) at Cliveden, the home of Frederick, Prince of Wales (1707–51), where Arne became introduced to those opposed to the politics of Robert Walpole (1676–1745) in his joint roles of First Lord of the Treasury and Chancellor of the Exchequer. It was commonly believed that Walpole abused his position for personal gain and exerted undue influence over the court of George II. A loosely structured group of intellectuals, politicians, and artists joined forces in the “Politics of Opposition” against Walpole and the king. This group gravitated to the writings of Henry St. John, Viscount Bolingbroke (1678–1751) whose liberal ideology in The Idea of a Patriot King was set down in 1738. Although initially much circulated privately, the work’s first authorized publication came only in 1749, carrying a dedication to Prince Frederick who was clearly being groomed to fit Bolingbroke’s idea of kingship. The libretto for Alfred by David Mallet (1701/02–65) and James Thomson (1700–48) presented an allegory of the Prince of Wales as Alfred the Great (849–99). Thus, when Arne accepted the commission to compose the music for Alfred in 1740, it came with political associations. Such beliefs would have been attractive to a young composer who had every reason to believe that he would never find a place in the upper echelons of the musical establishment under George II. Today, the political agenda in the libretto is less evident and only the patriotic air “Rule Britannia” is heard today.

Arne enjoyed much success at the Drury Lane theatre, but his working relationship became strained when the management was taken over in 1747 by David Garrick (1717–79) and James Lacy (1696–1774). Garrick was an autocrat and politically conservative. A mutiny broke out at the beginning of the 1750–51 season that saw the departure of Arne, his sister Susanna Cibber and leading actors such as Spranger Barry and Margaret [Peg] Woffington for rival theatres. Garrick never really forgave Arne for his desertion, although the relationship was eventually repaired sufficiently that Arne contributed a dozen subsequent works for the Drury Lane theatre. None of these achieved the same level of success as Arne’s work for the rival Covent Garden theatre, however. There, in 1762, Arne enjoyed one of his greatest triumphs when Artaxerxes was produced on February 2nd. Based on a translation of an Italian libretto by Metastasio from 1729 (possibly by Arne), the work was an instant success and was regularly performed well into the nineteenth century. It is occasionally revived in the modern era and arias such as “The Soldier, tir'd of war's alarms” and “Water parted from the Sea” remain concert favourites.

The opportunity to expand Arne’s musical influence in London came about in the mid-1740s when several of the summer pleasure gardens in London introduced vocal music to their concerts. This innovation was not without its difficulties given that the concerts at these locations were presented out-of-doors in an era when amplification did not exist. Venues such as Marylebone and Vauxhall had raised, covered bandstands with pipe organs where instrumental music had previously been performed to an audience who gathered around in the open air. The outlier to this arrangement was the Ranelagh Gardens which boasted a covered structure called the Rotunda. This circular building was large enough so that the audience could promenade while listening to the performance of music. It was also heated which further made it attractive in bad weather. Contemporary reports suggest that the acoustics were little better than at other locations.

Arne began his association with the Vauxhall Gardens in 1745 when his wife was one of three singers hired to perform at the concerts. Thereafter, Arne created a large quantity of vocal music for the Vauxhall concerts. Although there had been public gardens in Vauxhall since 1661, it was not until 1728 when Jonathan Tyers (1702–67) leased the land and transformed the old gardens into a pastoral retreat that they achieved social prominence. Instrumental concerts had begun in 1735, but the introduction of singers of great repute made the location a favourite haunt during the summer months. Frederick, Prince of Wales, was the patron and Jonathan Tyers did much to encourage his attendance at the concerts. The Politics of Opposition were closely connected with the Vauxhall imagery. As David Coke and Alan Borg write:

This rebellion, embodied at Vauxhall in the patronage of Frederick, Prince of Wales, the paintings of William Hogarth and Francis Hayman, the sculpture of Louis François Roubiliac, the music of Thomas Arne and George Frideric Handel, and the designs of Hubert-François Gravelot and George Michael Moser, reflected the libertarian attitudes and enlightened management style of Jonathan Tyers. The brash light-heartedness, the unwillingness to follow rules, the energy, informality and experimentation that were intrinsic to Vauxhall are all typical of the English Rococo; this intoxicating cocktail enhanced every evening’s excitement, and put Tyer’s visitors in the right frame of mind to enjoy themselves, to refresh their spirits and to spend their money. (Vauxhall Gardens: A History, 2011)

Arne would have found himself in congenial company there and his continued composition for the Vauxhall concerts demonstrates the importance that they played in his musical life.

Vauxhall was not the only pleasure garden, however, where Arne’s music was heard and where he actively promoted himself. In the early 1750s, Arne composed music for the concerts at Cuper’s Gardens located in Lambeth, on the south side of the Thames, opposite Somerset House. Several of the singers there had direct contact with Arne: Sibilla Pinto (1720–66) had been a student of Arne’s, while Master George Mattocks (c. 1738–1804) had made his stage debut in Arne’s The Triumph of Peace at Drury Lane in 1749. Arne’s time at Cuper’s Gardens was short-lived, however. The management of the gardens was denied their license to open in 1753, likely because of the reports of pickpockets and wide-spread immorality on the premises.

Daniel Gough introduced vocal singing in the concerts at the Marylebone (Marybone) Gardens in 1744. Once again, Arne’s music was frequently heard there, and he took an active role in those concerts which promoted the singing talents of his “natural” son, Michael (c. 1740–86) during the early 1750s. Michael Arne first appeared in concert at Marylebone on July 5, 1751, and appeared throughout the remainder of season. Thomas Arne also composed music specifically for Anna Maria Falkner’s benefit concert at Marylebone on August 4, 1752. Some of the repertoire that Michael Arne and Miss Falkner performed at Marylebone is represented in Book 3 of Thomas Arne’s Vocal Melody which appeared after the 1751 pleasure-garden season was over.

Arne’s music was much featured in the concerts at Ranelagh during the 1760s. Mollie Sands writes that “for many years his music predominated, and the Ranelagh singers were nearly all connected with him in some way; they were his wife’s relations, or his pupils, or had sung in his operas” (Invitation to Ranelagh, 1946). The concerts of the pleasure gardens became useful tools to promote his musical career. Although it might seem that his presence was ubiquitous in these locations, it was still something of an exaggeration for Hubert Langley to have written that Arne had become the “Director of Music to the Public Gardens” (Dr. Arne, 1938). Still, Arne’s influence over the musical life of London was considerable. If he never achieved a court appointment or had his music performed in the prestigious winter concerts in London, his stage works dominated the London theatres and his vocal music was regularly featured in the concerts of the pleasure gardens and delighted Britons in domestic settings. As such, he was one of the most widely performed and celebrated British composers of his generation.