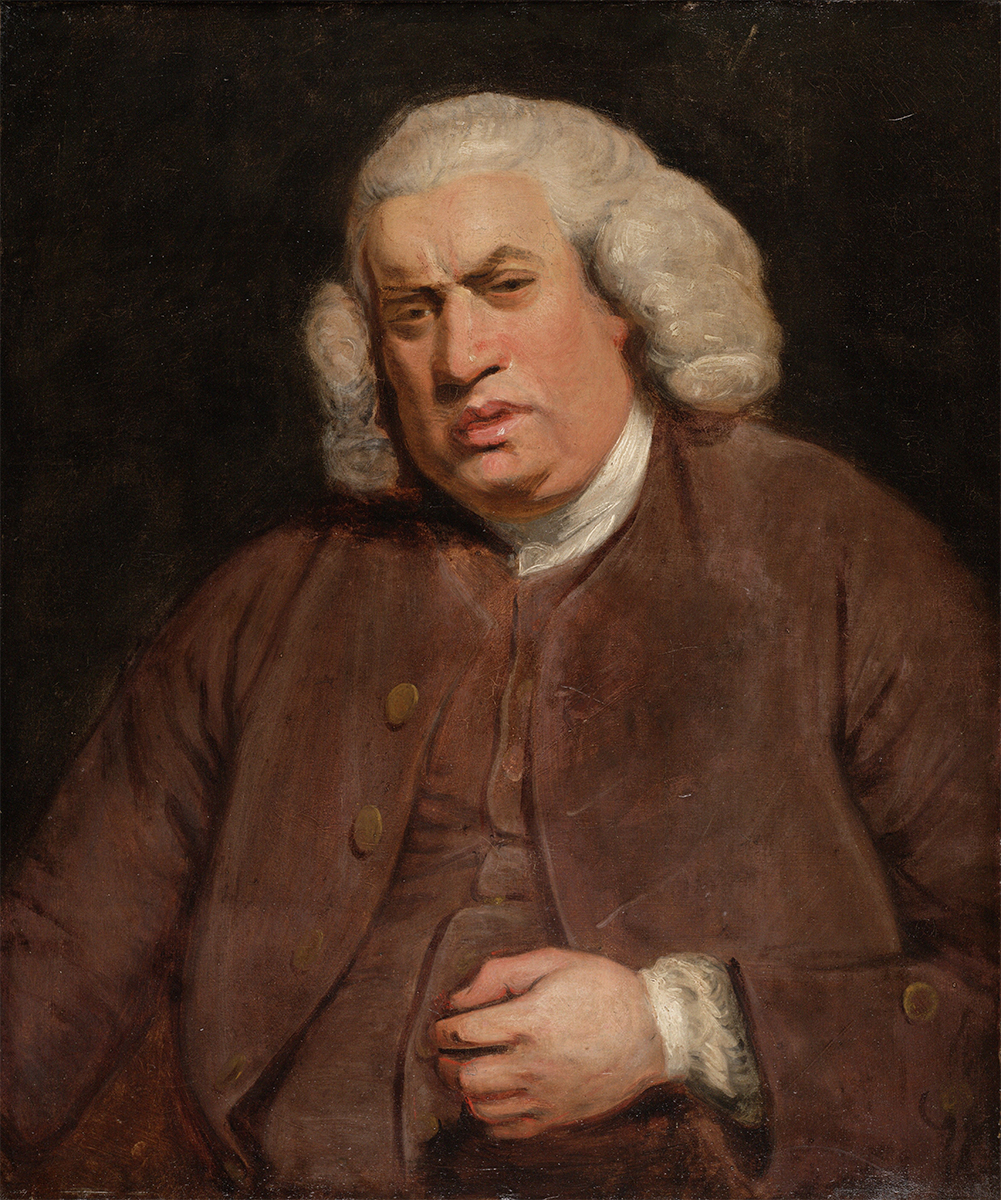 One of history’s most famous Londoners, Samuel Johnson first came to the capital in 1737 from Lichfield, Staffordshire, with another famous Londoner, David Garrick. The young Garrick was on his way to a new school while Johnson hoped to find a theatre to stage his tragedy, Mahomet and Irene. Ironically, this play, renamed Irene, would not be staged until Garrick himself undertook it at Covent Garden Theatre in 1749.

Johnson had indeed struggled for much longer than the sociable and talented Garrick, who quickly rose to prominence on the wave of enthusiasm for Shakespeare in the early 1740s. Johnson by contrast was an ungainly classical scholar, hampered by tics and unsightly scars, without a university degree or any kind of useful alliances. On arriving in London, he tried to connect himself with Edward Cave’s Gentleman’s Magazine, offering Latin poems and translations until finally he made his first breakthrough, an imitation of Juvenal’s tenth Satire, “London.” When the prominent Opposition book-seller Robert Dodsley published this poem in 1738, it powerfully channeled Patriot clamours against the administration of Sir Robert Walpole. With this city poem, filled with images of a corrupt metropolis, Johnson secured his desk at the Gentleman’s Magazine, becoming essentially Cave’s right-hand man. Into the 1740s he wrote numerous reviews, biographies and articles along with a series of Parliamentary reports under the guise of being fictional debates in the senate of Swift’s Lilliput. Of Johnson’s various works in in the 1740s, the masterpiece was his biography of his fellow writer Richard Savage, a ragged Patriot with whom Johnson had wandered the midnight streets before Savage’s early death in 1743. The Life of Savage (1744) was unlike any previous biography. It recounted, with great compassion, the life of a talented if hapless vagabond, a man who wasted every opportunity that he was ever given yet retained a bedraggled dignity and love of virtue. It is the greatest Grub Street biography, earning Johnson the lasting admiration of prominent friends such as the painter Sir Joshua Reynolds.

Johnson himself escaped Grub Street when he was offered a glorious opportunity by a consortium of prominent London booksellers led by Robert Dodsley. Still obscure and without patronage, Johnson seemed an unlikely choice to compose a desideratum of British letters, a new English dictionary. Despite his lack of prominence, he had clearly impressed important people as capable of undertaking a project worth the enormous sum of £1,575. With this money, Johnson rented a large house in Gough Square near Fleet Street and began his own small industry of literary workmen, six amanuenses to aid in finding and organizing material. Though delayed by illness and the death of his beloved wife Tetty, Johnson completed the two heavy volumes of A Dictionary of the English Language in 1755. Besides its importance in shaping the language, this dictionary is a monument to independent authorship and a historic riposte to the many who had ridiculed authors like Johnson as “Grub Street hacks.” As if to mark this moment, Johnson rejected the last-minute patronage of Lord Chesterfield, luminary of the beau monde, proudly defending himself as a retired scholar and literary professional.

It might well be said, indeed, that Johnson was putting to rest prejudice against professional authorship. In the bi-weekly periodical, The Rambler, which, remarkably, Johnson was publishing at the same time as he was composing the dictionary, he defended “the manufacturers of literature,” London’s workforce of translators and copyists, as worthy though obscure members of the literary profession. In the dictionary, he famously defined “lexicographer” as a “harmless drudge,” for he continued to see himself as primarily a labourer in the mines of literature. Johnson indeed still wrote poetry, publishing another successful imitation of Juvenal, “The Vanity of Human Wishes,” in 1749. Nevertheless, soon after the dictionary, he took on another large project that required dogged labour rather than creativity, a new edition of the plays of Shakespeare. He got around to this work slowly, not completing it until 1765. The truly distinguishing feature of this edition was its preface in which Johnson advanced a cogent defense of Shakespeare against his neoclassical critics, particularly Voltaire. Shakespeare was clearly a congenial figure for Johnson, for here was another man from the provinces who had come to London and made good against all odds. Yet these two writers also represented two sides of the evolving literary profession. In Johnson’s own view, Shakespeare was helped rather than hindered by his lack of formal learning, for he gleaned his vast knowledge of human nature from observation on the world itself. Johnson, on the contrary, remained a hardworking scholar informed by the world of books. He was the natural critic rather than original writer, an author who sought to explain Shakespeare’s enduring greatness through general principles.

Despite Johnson’s willing embrace of this role of “secondary” author—a writer on writers rather than an original creative genius—he had risen to such prestige that a young Scot, James Boswell, eagerly sought him out in 1763 as the nation’s most famous literary personality. This would become one of the most celebrated relationships in literary history, for Boswell would later bring to life, in his Life of Johnson, the loquacious and eccentric personality behind Johnson’s tomes of scholarship and grave pages of morality. Boswell’ s biography revealed another dimension of the emergent professional writer—the busy worker surrounded by books at his desk, the irrepressible pundit commenting on current literary figures and ideas. Johnson was now in full stride as a social and political commentator. His second set of periodical essays, The Idler (1756–8), eschewed moral teaching in favour of wide-ranging commentary on London people and the mobbish patriotism incited by the war with France. His short novel, Rasselas (1759), which he wrote quickly to pay for his mother’s funeral, exploited a recent fad for oriental romances to imagine an up-to-date world filled with pretentious philosophers and bewildered searchers. Johnson also threw himself into political pamphleteering following the rise of the populist radical John Wilkes in the 1760s. The False Alarm (1770), Thoughts on the Falkland Islands (1771), The Patriot (1774) and Taxation No Tyranny (1775) rose towards a crescendo of mockery against ranting preachers of “liberty” who were really self-interested hypocrites. As he asked in Taxation no Tyranny, his polemic against the American revolutionaries, “how is it that we hear loudest yelps for liberty among the drivers of negroes?” Boswell’s portrait of Johnson as a truculent Tory in The Life of Johnson is, to a large extent, accurate: he could be overbearing and intolerant, often preferring witty insults over reasoned debate. On the other hand, we find more complex and nuanced reasoning in much of his published work. Conversation was the medium where Johnson found release from personal demons and from his pained awareness of the real complexities of experience. Johnson’s scholarly obsession with listing, cataloging, indexing, and correcting represents a similar effort to reduce complexity to manageable order. In his finest writing, on the other hand, as in The Life of Savage or Lives of the Poets, Johnson excelled all other eighteenth-century writers in his capacity to see people, problems and books in a kaleidoscope of shades and ambiguities.

Lives of the Most Eminent English Poets (1781) was Johnson’s last and, in Boswell’s opinion, his greatest work. This was another example of Johnson taking on a booksellers’ project and turning it into a masterpiece. Commissioned to provide a series of biographies to accompany John Bell’s edition of The Poets of Great Britain, Johnson produced over fifty critical introductions that were published together as a separate work. Lives of the Poets by no means provides a comprehensive survey of English literature; it contains no women writers and ignores the novel. Nonetheless, his biographies present a roughly chronological overview of the development of authorship from the mid seventeenth century to the third quarter of the eighteenth century, showing how the age of patronage gave way to the emergence of professional writers like Pope and Addison. Although some modern scholars have presented Johnson as practicing an old form of criticism that sought the truth of works in writers’ lives, he was in fact pioneering a textual criticism that attempted to separate the aesthetic quality of texts from extraneous factors such as personal favour, fashion, and politics. Despite his own notorious political views, which hostile readers blamed for skewing his judgments, Johnson was quite able to distinguish the greatness of Paradise Lost from Milton’s regicide Puritanism or the genius of The Seasons from Thomson’s Whiggish enthusiasms. Contrary to an old view of Johnson, moreover, he fully rejected neoclassical rules in favour of judgments that, unbound by rigid precepts, regarded aesthetic pleasure as the true measure of literary quality, however it was achieved.

Partly through the influence Boswell’s biography, “Dr. Johnson” became known to the Victorians as a quaintly retrograde vestige of the past, an opponent to all that seemed new and challenging. In fact, Johnson had championed much that was new—from professional authorship to women intellectuals, from opposition to slavery to love of good novels like Evelina. Johnson established the model for future dictionaries and pioneered a new form of literary criticism. A devoted Londoner who loved the cut-and-thrust and diversity of urban life, Johnson had helped to create the world of modern literature and authorship.