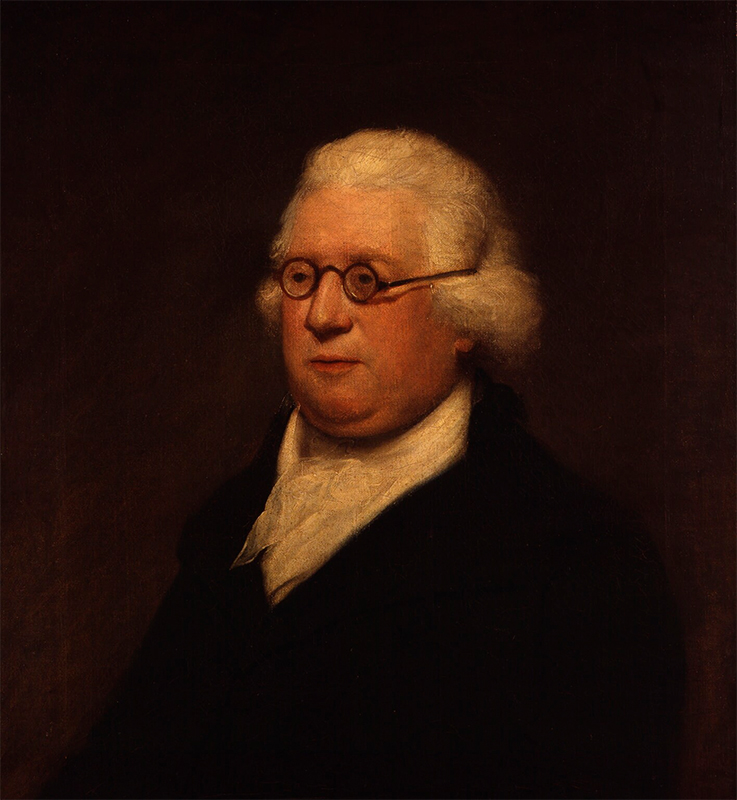 James Hook was born in Norwich in the parish of St. John, Maddermarket, on 3 June 1746. He was severely club-footed, a considerable handicap at that time. William Parke records that “his feet had, by early surgical operations, been so much improved, that he could walk in a limping manner tolerably well. One foot, however, in appearance, was much better than the other, though bad was the best.” Hook was not embittered by his situation, and Parke records that Hook “could even laugh at his own infirmities” (Musical Memoirs; comprising an Account of the General State of Music in England, 1830). Throughout his life, Hook appears to have been a genial person who enjoyed company and who possessed a great sense of humour. His musical prowess was noted at an early age; he played the harpsichord by the age of four and was appearing in concert by the age of six, a true child prodigy. Musical instruction was provided by James Garland at the Norwich Cathedral, under whose tutelage Hook not only developed as a keyboard performer (both organ and harpsichord) and also as a composer.

Hook had settled in London before February 1764 to further his musical career; however, his options were limited because he did not play any orchestral instruments. He was thus restricted to church work, performing organ in the pleasure gardens, and teaching. It is not surprising then, that the first recorded references to Hook as a performer in London are at a pleasure garden. Theodore Busby writes that Hook “commenced his professional career at White-Conduit House, where he daily entertained the visitors with his executions on the organ” (Concert Room and Orchestra Anecdotes of Music and Musicians, 1825). This enterprise was located in the area of Islington in present-day North London, which was then very rural and not a prestige location.

Hook soon made a name for himself in London as an organist, composer and teacher. His ballads were soon performed in the concerts at the Vauxhall and Marylebone gardens. Hook obtained the more prestigious position of organist and composer at the Marylebone Gardens beginning in 1768. His official title was “Music Master,” indicating that he likely supervised the programming of the concerts and performed regularly in them. Indeed, he was mentioned in the newspapers advertisements on the opening day of that season (23 May 1768) performing “a concerto on the organ by Mr. Hook.” The move to Marylebone was of a significant step forward in the London musical world where both his performance skills and compositions became known to a wider audience.

Work at the pleasure gardens was seasonal, however, leaving the greater part of the year for other employment. He was organist at St. John Horselydown, Bermondsey, for many years; it was fortunate that most English organs of the period did not have full pedal boards and that there was not a strong tradition of rigorous pedal technique, given his handicap. Some sources state that Hook became the organist of St. George’s Chapel, Windsor; however, the records of the St. George’s Chapel Archives and Chapter Library make no reference to him. Teaching became a significant part of his livelihood. William Parke records that “his time was a good deal taken up in teaching the piano-forte, by which his income was greatly extended, and to my knowledge his annual receipts from only two schools, one at Chelsea and other at Stepney, were six hundred pounds” (Musical Memoirs; comprising an Account of the General State of Music in England, 1830). Hook hoped for a regular appointment at the Drury Lane theatre, although none was forthcoming. Undeterred, he produced music for twenty-four stage works between 1769 and 1813, with several of the late works composed to libretti by his son Theodore Edward Hook. Neither Hook père nor fils had the strongest theatrical instincts, although several of their patriotic works enjoyed success. On 23 April 1805, they presented The Soldier’s Return; or, What can Beauty Do?, a comic opera in 2 acts, at the Theatre Royal, Drury Lane. This opera proved to be very popular with audiences during a time of war and it played in that theatre until 31 October 1806.Newspaper advertisements show that it was performed subsequently in Edinburgh, Aberdeen, Newcastle, Exeter, Hampshire, and other locations.

Hook began his association with the Vauxhall Gardens in 1774, and quickly established himself as being essential to the musical success of the gardens. John Marsh visited the enterprise in June of 1775, and reported that he was “much pleas’d with Barthelemon on the violin, Hooke on the organ & with some humorous catches & glees [sung] by Mrs Weichsell, Vernon etc.” (The John Marsh Journals: The Life and Times of a Gentleman Composer, 1752-1828, 1998). Hook’s tenure at Vauxhall was longstanding and he used the concerts at the gardens to disseminate his huge output of vocal and instrumental music. He remained in his position of organist and resident composer until 1820, a remarkable tenure of 46 years. Hook left this post unexpectedly, and Theodore Busby records that “Mr. Hook, of ballad notoriety, who, after setting to music more than a thousand songs, has deemed it high time to retire from the public ear, and the public eye ... so little was his abrupt retirement expected or understood, that the proprietor of the [Vauxhall Gardens] ... kept his station in the band open for him, during one entire season” (Concert Room and Orchestra Anecdotes of Music and Musicians, 1825).

Parke’s memoirs are filled with admiration for Hook’s songs: “As a composer he was for many years extremely popular; and for natural and pleasing melodies in his songs, &c. he has not perhaps been surpassed” (Musical Memoirs; comprising an Account of the General State of Music in England, 1830). Hook’s great facility allowed him to compose quickly, and over 2,000 examples of songs, rondos and cantatas etc. came from his pen. Many of these works were ballads and other popular songs, which were intended for home consumption after they were introduced in the concerts at Vauxhall. Many of the texts that he set were patriotic in nature which helped maintain morale during the long Napoleonic wars. In addition, Hook composed concerti for various instruments (keyboard, trumpet, clarinet), with those for keyboard serving his need to perform an organ concerto each evening at the Vauxhall concerts.