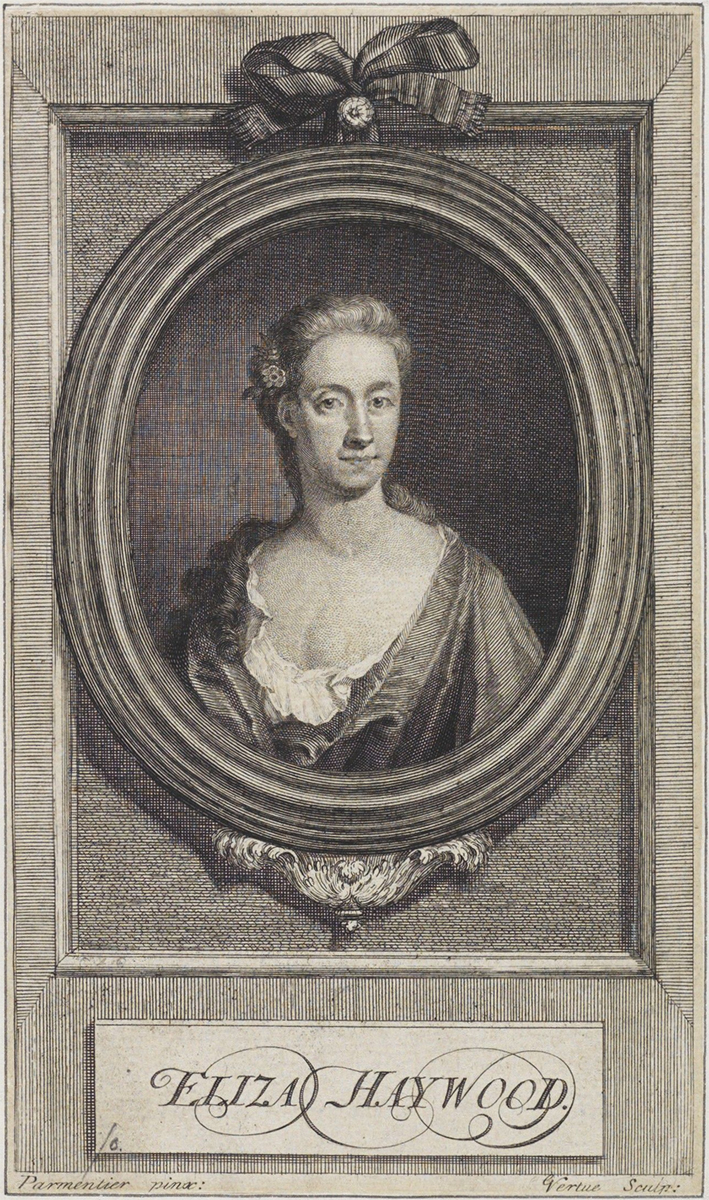 Eliza Haywood was a prolific writer of novels, plays, translations, advice manuals, and periodicals over a long career which lasted from 1719 until shortly before her death in 1756. She was also on occasion an actor and for a short period a publisher and bookseller. Very little new evidence about Haywood’s personal life has surfaced since her first biographer David Erskine Baker explained in 1764 that she had suppressed most details:

from a Supposition of some improper Liberties being taken with her Character after Death, by the Intermixture of Truth and Falshood with her History, she laid a solemn Injunction on a particular Person, who was well acquainted with all the Particulars of it, not to communicate to any one the least Circumstance relating to her … All I have been able to learn is, that her Father was in the Mercantile Way, that she was born at London, and that, at the Time of her Death, which was, I think, in 1759, she was about sixty three Years of Age.—The Companion to the Play-house volume 2.

Haywood was born ca. 1693–5. Her parents remain unknown. Nothing is known of her upbringing or education, though she was clearly an able writer, editor, and translator. We do know that “Mrs. Haywood” appeared on stage as Chloe in Shadwell’s Timon of Athens; or, the Man-Hater at the Theatre Royal in Smock Alley, Dublin, in the fall of 1714. By 23 April 1717, she was back in London, appearing on stage at Lincoln's Inn Fields in John Banks’s The Unhappy Favourite: or, the Earl of Essex as the Countess of Nottingham.

The book that launched her career as one of the first English novelists was the successful three-part Love in Excess (1719–20). Quickly following this publication was an experiment in subscription sales, Letters from a Lady of Quality to a Chevalier translated from the French, published in December 1720. This relatively unsuccesful venture would be her only foray into subscription sales of her works.

In the early 1720s Haywood was a member of a coterie of writers gathered around poet, dramatist, and essayist Aaron Hill. This circle, dubbed the "Hillarians," included author Richard Savage and poet Martha Sansom (née Fowke). Haywood's later attack on Sansom's character in Memoirs of a Certain Island Adjacent to the Kingdom of Utopia (1724) as the sexually licentious Gloatitia was followed in turn by Savage's The Authors of the Town; a Satire Inscribed to the Author of The Universal Passion (1725) in which he characterised Haywood as wanton woman and writer both: “A cast-off Dame, who of Intrigues can judge, / Writes Scandals in Romance—A printer’s Drudge! / Flush’d with Success, for Stage-Renown she pants, / And melts, and swells, and pens luxurious Rants.” The viciousness of these attacks contributed to the assumption that Haywood was Savage's own abandoned lover, but there is no evidence whatsoever for this, or for the oft-repeated conjecture that Savage had fathered a child with Haywood and then left her for Sansom.

Haywood was famously satirized in Alexander Pope's Dunciad (1728,1729), where she is exhibited with "Two babes of love close clinging to her waist" as a prize for the race between booksellers in the heroic games celebrating the inauguration of the new King of Dunces. Pope thus immortalized in print the gossip that she had had at least two illegitimate children. In an undated letter to an unknown recipient seeking patronage, Haywood herself claimed that she had two children to support, though she did not imply they were anything other than legitimate: "an unfortunate marriage has reduced me to the melancholly necessity of depending on my Pen for the support of myself and two Children, the eldest of whom is no more than 7 years of age." Biographer George Whicher proposed in 1915 that Haywood's estranged husband was the Reverend Valentine Haywood, but that notion is now widely disregarded. No other plausible candidates currently exist.

Haywood operated a pamphlet shop at the Sign of Fame in the Great Piazza of Covent Garden from 1741–44, where she offered anti-ministerial works among other wares. In December 1749 she was arrested on suspicion of seditious libel in connection with a political pamphlet, A Letter from H—G---g ... to a Particular Friend (1749). In her deposition in 1750 she signed her address as Durham Yard in the Strand. From then, her whereabouts are uncertain. Haywood may have been living at number 2 Cowley Street in Westminster when she died, 25 February 1756. Papers reported variations of the following:

Yesterday Morning died, in the 60th Year of her Age, after a very severe Illness of three Months, which she bore with great Fortitude and Resignation, Mrs. Eliza Haywood, the celebrated Authoress of some of the best Moral and Entertaining Pieces that have been publish’d for these many Years. The great Hand she had in those elegant Productions the Female Spectator, and Epistles for the Ladies; together with her Histories of Miss Betsy Thoughtless, Jemmy and Jenny Jessamy, her Invisible Spy, and the Fortunate Foundings, will ever remain as living Monuments of her Merit.—Whitehall Evening Post or London Intelligencer 1562, 26 February 1756

Erskine Baker characterized Haywood's career as one of redemption: "whatever Liberty she might at first give to her Pen, to the Offence either of Morality or Delicacy," he wrote,

she seem'd to be soon convinced of her Error, and determined not only to reform, but even attone for it; since, in the numerous Volumes which she gave to the World towards the latter Part of her Life, no Author has appear'd more the Votary of Virtue, nor are there any Novels in which a stricter Purity, or greater Delicacy of Sentiment, has been preserv'd ... I was told by one, who was well acquainted with her for many Years before her Close of Life, that she was good-natured, affable, lively, and entertaining; and that, whatever Errors she might in any Respect have run into in her youthful Days, she was, during the whole Course of his Knowledge of her, remarkable for the most rigid and scrupulous Decorum, Delicacy and Prudence, both with Respect to her Conduct and Conversation.—The Companion to the Play-House, 1764

Contemporary biographers choose a more nuanced approach to the well established narrative of Haywood's career as a progress from scandal to reform of both the author and her works (see, e.g., Patrick Spedding, "Shameless Scribler or Votary of Virtue? Eliza Haywood, Writing (and) Pornography in 1742," 2001; and "Eliza Haywood at The Sign of Fame," 2011; Katherine King, A Political Biography of Eliza Haywood, 2012; and Tiffany Potter, ed., Approaches to Teaching the Works of Eliza Haywood, 2020).