To a great extent our models are created to conform to the questions we want to answer, which in turn are influenced by culture and discipline. The "communications circuit" proposed by Robert Darnton (1982) was a closed circuit, and "the cycle of the book" or "whole socio-economic conjuncture" proposed by Thomas R. Adams and Nicolas Barker (1993) showed that circuit turned inside out. Perhaps both models reflected a pre-Web approach to metaphors for communication.

Influenced by my own studies on networked communications and digital approaches to literary and cultural history, in 2006 at the DeBartolo Conference on "The Book," I proposed a model for imagining (and interpreting, and representing) print culture as a distributed network.

Consider Robert Darnton's influential diagram of a closed circuit of communications where a manuscript traveled from author to publisher, then to printer, and then, as book, via shippers, to booksellers and readers, who would in turn potentially influence the production of new works. At the center of the circuit are the forces that influence the tradesmen and thus the communications circuit itself: economics, social issues, intellectual and legal influences. This model has been an important one in the development of the field of book history, and continues to be so, but in 1993, bibliographers Thomas R. Adams and Nicolas Barker proposed a new model for the study of the book. Noting that Darnton's was appropriate for a social historian, they argued that, "from the point of view of serving the history of the book, the weakness of the scheme is that it deals with people, rather than the book." They proposed instead to invert, or turn Darnton's model inside out, so that "the cycle of the book becomes the centre: [with] the indirect forces...outside it, looking and pressing inwards" (15). The authors concluded with the acknowledgment that their map is perhaps reminiscent of the medieval maps of the world that placed Jerusalem in the center and other geographical features at the margins, as a way of acknowledging that with the arrival of the Internet the book will not always occupy the center of bibliographical studies.

This contest over centers and margins, over mapping a defining model for "the history of books," is indicative of a larger difficulty in creating a model that accommodates multiple viewpoints and multi-dimensional avenues of influence.

Perhaps, rather than the "circuit" imagery that applies so well to modes of traditional research published in print, a metaphor of network topologies would better suit our purposes for a new digital study of wider rhythms of the history of books and communications. Darnton's model for book historians corresponds to a centralized network (figure 1), a pattern such as that used by databases and web servers that serve information to clients from a centralized locale (i.e. author ←→ publisher → printer distributing to the many nodes of → shippers → booksellers →readers, etc., with occasional feedback or requests from readers). Adams' and Barker's model for bibliographers, comprising the socio-economic conjuncture of publication → manufacture → distribution → reception → survival of the book, omits the author entirely but still, with uni-directional arrows, represents something along the lines of a centralized network, where the publisher, situated at the apex of either model, is the main node of distribution. While both diagrams acknowledge intellectual, political, legal, and social influences either at the centre or the margins of the schema, they do not, it seems to me, easily accommodate the dialogic complexities of intertextuality, allusion, and narrative echoes, plagiarism, theft, or the influences of orality and editorial decisions upon editions that are of interest to scholars who study literature and theory in addition to material books, their production, and dissemination. From the viewpoint of a literary scholar, the communications network corresponds to something like a distributed network with nodes of distribution in a grid or mesh of words and ideas as well as physical texts.

A digital Grub Street would provide a model to map these relationships onto existing maps—where the streets of London would become a stratum, or layer, in a distributed network (figures 2 and 3), which presupposes that each participant of the network acts both as client and server. In effect, it would model a peer-to-peer system where peers are able to distribute both information and queries directly through other users of the network rather than relying on a centralized distribution hub. In this network topology the model of an eighteenth-century communications circuit incorporates new dimensions of peer-to-peer communications such as intertextual reference, plagiarism, and literary theft along with the other “nodes” of authors, printers, booksellers, binders, salons, etc., distributing texts through a variety of media forms. 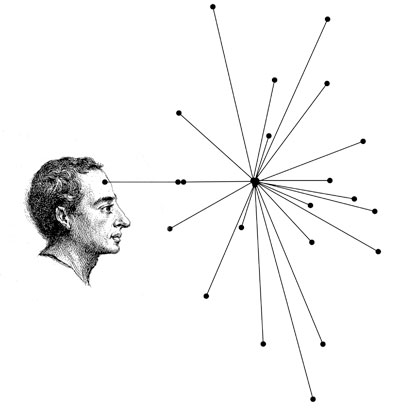 Figure 1. Topology of a centralized network, where books are distributed from the central node of a publisher (via printers, shippers, and booksellers) to readers, and occasionally from publisher or readers back to the author.

(In this model, each line and pair of nodes would represent a circuit of publication for a given press run, with communication from the apex of the circuit—publisher or publication in Darnton's or Adams and Barker's models—moving through stages or events and ultimately communicating back to the publisher, whereupon a new publication cycle ensues. Where their models represent the circuit or cycle in a single oval of repeated stages/events, the centralized network diagram (inspired by computer network topologies) presents the series of cycles as separate lines) emanating from the publisher.) 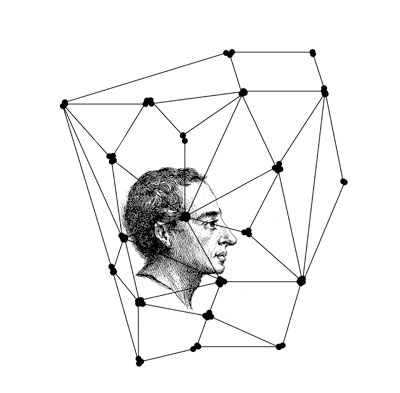 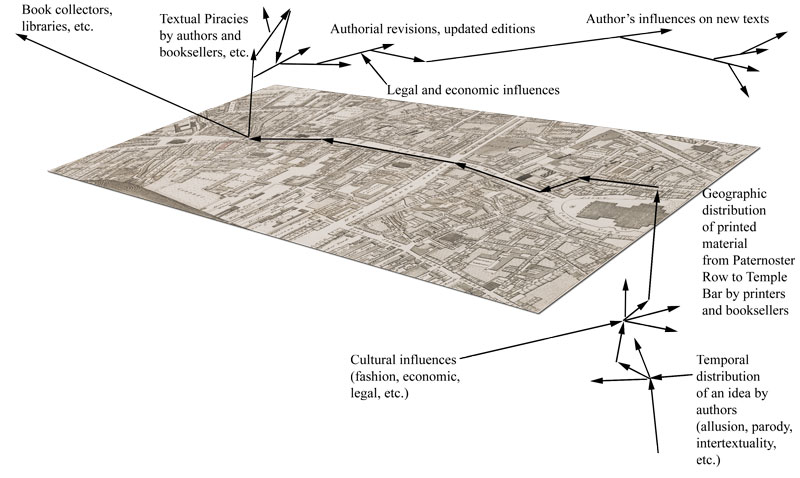 Figure 3. Schematic representation of London's topography and associated data to represent a decentralized network of people, places, books, and other influences, which may register at any point other than what is indicated here.

(In this hypothetical view an author or group of authors produce a work influenced by events, cultural influences, other ideas expressed orally and in printed materials, and deliver it to a printer in Paternoster Row, who in turn delivers printed materials to a bookseller near Temple Bar, and the material object and the ideas then continue to be distributed through a spatio-temporal network.)

—Allison Muri, excerpt from: "The Technology and Future of the Book: What a Digital 'Grub Street' Can Tell us About Communications, Commerce, and Creativity," in Producing the Eighteenth-Century Book: Writers and Publishers in England, 1650–1800, ed. Laura Runge and Pat Rogers (University of Delaware Press, 2009), 235-50. First presented in 2006 at the DeBartolo Conference on "The Book," February 16-18, Tampa, Florida.