Owls, Print Culture, and Knowledge in Eighteenth-Century Britain: the Iconography of Grub Street

The Grub Street Project takes its name both from the street in London that became part of Milton Street in 1830 (figure 1) and from the derogatory term for a rising breed of hack writers scribbling away in a marketplace greedy for the latest news, politics, scandals, novels, and commentaries. Once home to the printers Bernard Alsop, Thomas Fawcett, and John Clowes, the historical Grub Street represents a particular moment in print culture and in the city's topography. Figuratively, Grubstreet has no particular topography or temporality: it is a fog of dulness inhabited by owls and dunces. In this sense, the term characterizes the tension between the idealized classical city and culture of the Augustans, with London imagined as a new Athens or Augustan Rome (figure 2) or print culture itself as an idealized purveyor of knowledge and wisdom bestowed upon Europe by Athena (figure 3), and the inversion of all such principles in a world of ill-educated literary hacks and unscrupulous money-grubbing printers and booksellers (figure 4). Accordingly, it signifies for this project both a qualitatively defined cultural space both "high" and "low," and a measurable and computable topographical one.

The owl, both Athenian and Grub-streetian, represents an aspect of London as heterotopia (see also "Graphs, Maps, and Digital Topographies: Visualizing The Dunciad as Heterotopia," Lumen 30 (2011)). The Grub-street owl appeared repeatedly in Pope's Dunciad (figures 5-9), and represents both the dunces of Augustan London and, indirectly, the ideals that have supposedly been superseded by the "taste of the rabble." 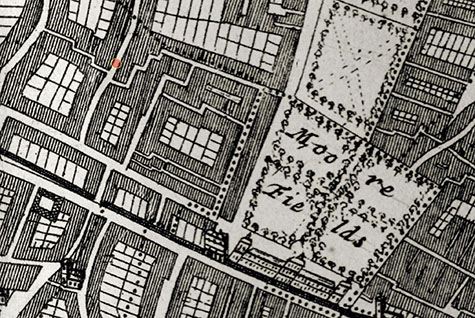 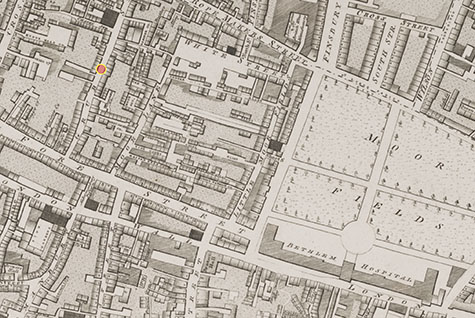 Figure 2. Pallas Athene/Minerva, goddess of wisdom, science, and war, and Apollo, god of eloquence, music, medicine, and poetry, as representative of London, Westminster, and Southwark (Strype, 1720), courtesy of Special Collections, University of Saskatchewan Library. [View related images of the goddess and her owl: (Show)] 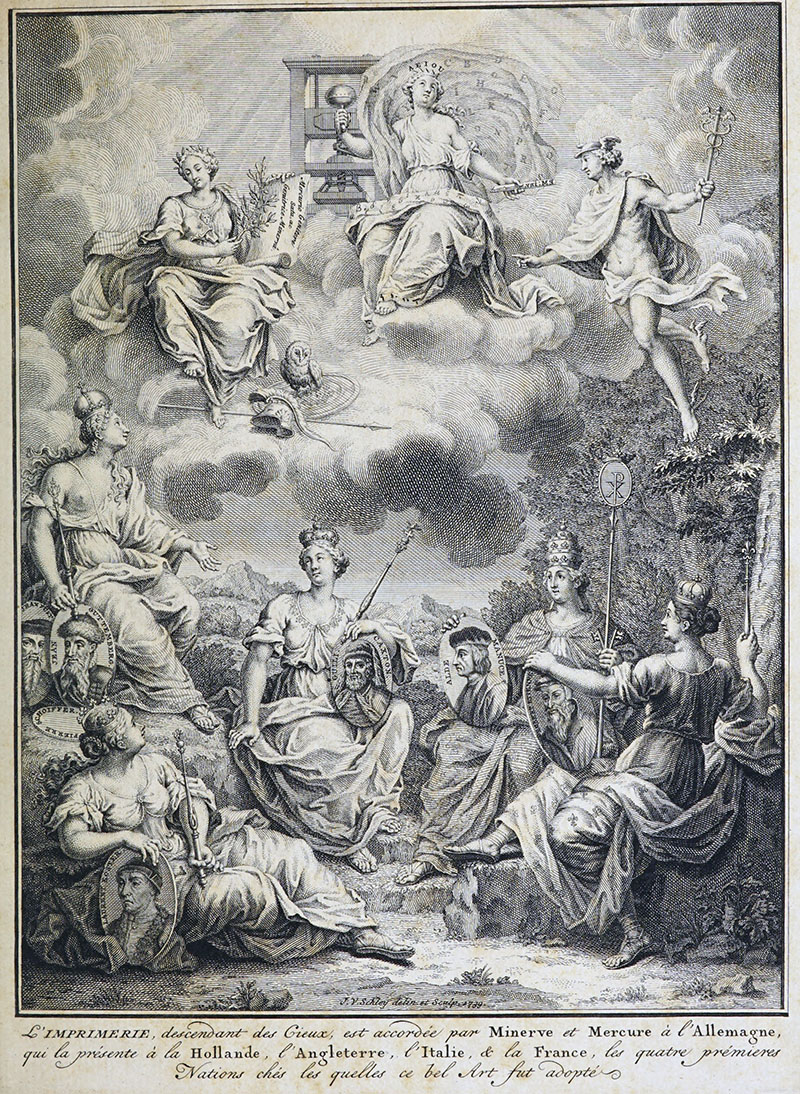 Figure 4. "The Art and Mystery of Printing Emblematically Displayed" from The Grub-street Journal No. 147 (October 26, 1732), courtesy of the Folger Shakespeare library (https://creativecommons.org/licenses/by-sa/4.0/). An owl on top of the press in the second panel impassively overlooks the pandemonium as Fog's Journal is carried off for drying. In the "Explication of the picture" (continued article, October 30, 1732) Bavius explains that "The owl, perched upon the press, being the bird of Pallas, the goddess of arts and sciences, very properly presides over the whole work: but whether we suppose it an Athenian, or a Grub-streetian owl, there is no impropriety in either supposition." The scene shows Edmund Curll's "chast press," as indicated by Cases of Impotency held aloft by the devil in the right-hand panel (The Case of Impotency Debated, in the Late Famous Tryal at Paris was printed for Curll at the Dial and Bible in Fleetstreet in 1714). Curll is shown "with the head of a Janus" in the middle panel: "overlooking and hastening of the work: He has two different faces, answerable to the two different weekly papers, which he is supposed to print: but which was designed for the whig face, and which for the tory, it is not easy to discover." Other title pages hanging above include Onania, Rochester's Poems, Manual of Devotion, Sessions Papers, Applebee's Journal, Read's Journal, London Journal, Universal Spectator and Weekly Register. A copy of Hyp Doctor is lying on the floor.

The image was reprinted in issue No. 148 (October 30, 1732) with some differences. The state above, courtesy of the Kenneth Spencer Research Library, University of Kansas, has the title Cases of Conscience written over the page facing Cases of Impotency. 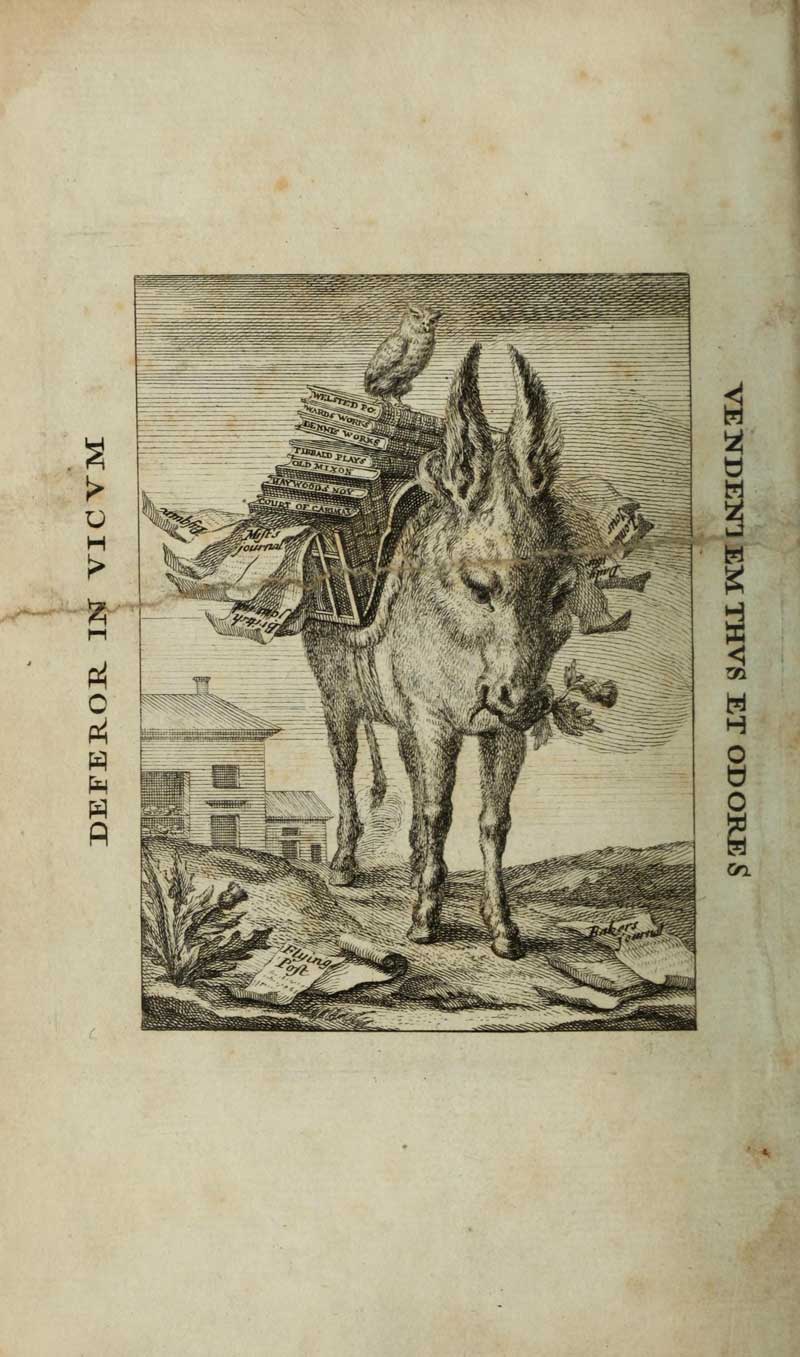 Figure 5. Frontispiece to The Dunciad: With Notes Variorum, and the Prolegomena of Scriblerus, printed for Lawton Gilliver at Homer's Head against St. Dunstan's Church, Fleetstreet, 1729. Courtesy of the Fisher Library, University of Toronto. 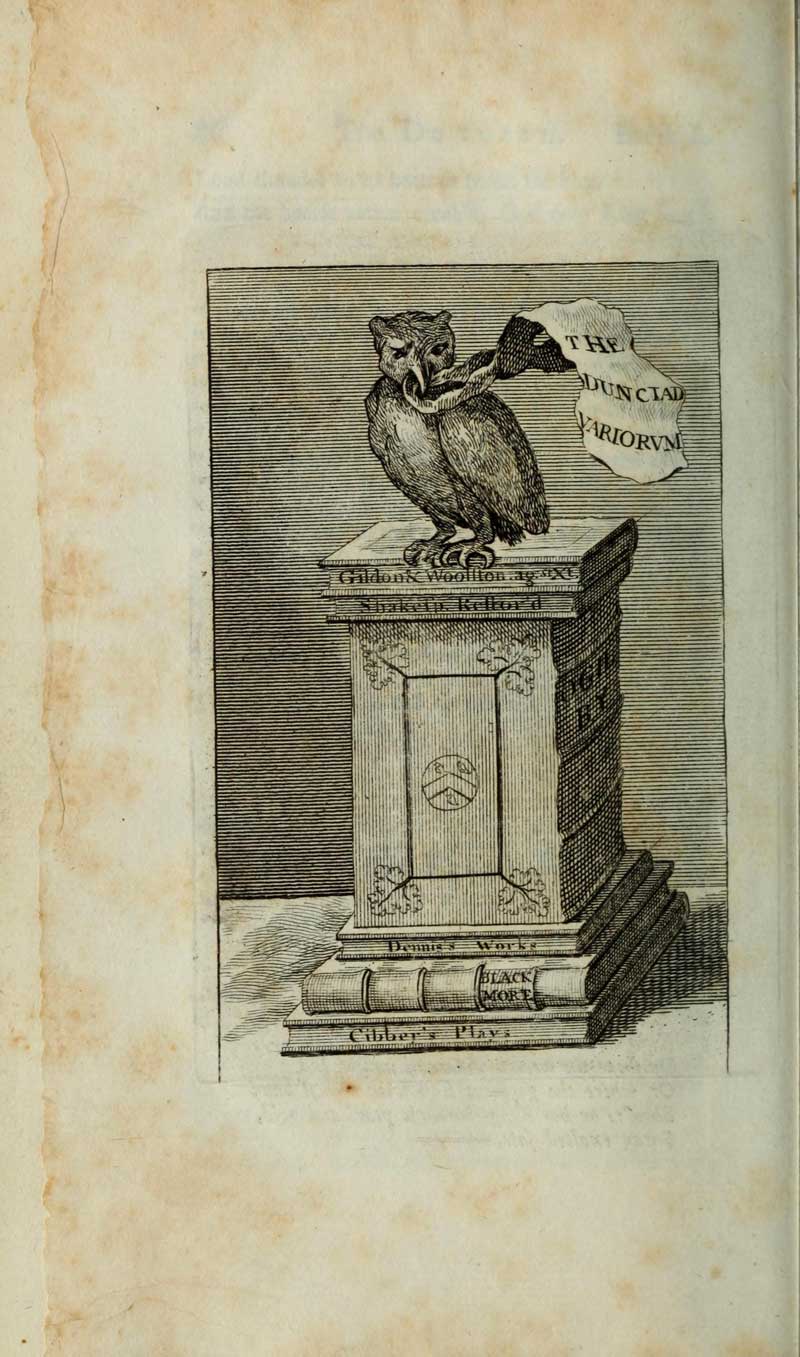 Figure 6. Illustration page facing the first page of Book II in The Dunciad: With Notes Variorum, and the Prolegomena of Scriblerus, printed for Lawton Gilliver at Homer's Head against St. Dunstan's Church, Fleetstreet, 1729. Courtesy of the Fisher Library, University of Toronto.

Figure 7. Tailpiece in the Dunciad, in Three Books, Written in the Year 1727. With Notes Variorum, and the Prolegomena of Scriblerus, showing the owl in a dunce cap (appears at the end of "Arguments to the Books," p. 19, the end of Book I, p. 14, and the end of Book II, p. 35). In The Works of Mr. Alexander Pope, vol. II, printed by J. Wright for Lawton Gilliver at Homer's Head in Fleetstreet, 1735. Courtesy of University of California Libraries. 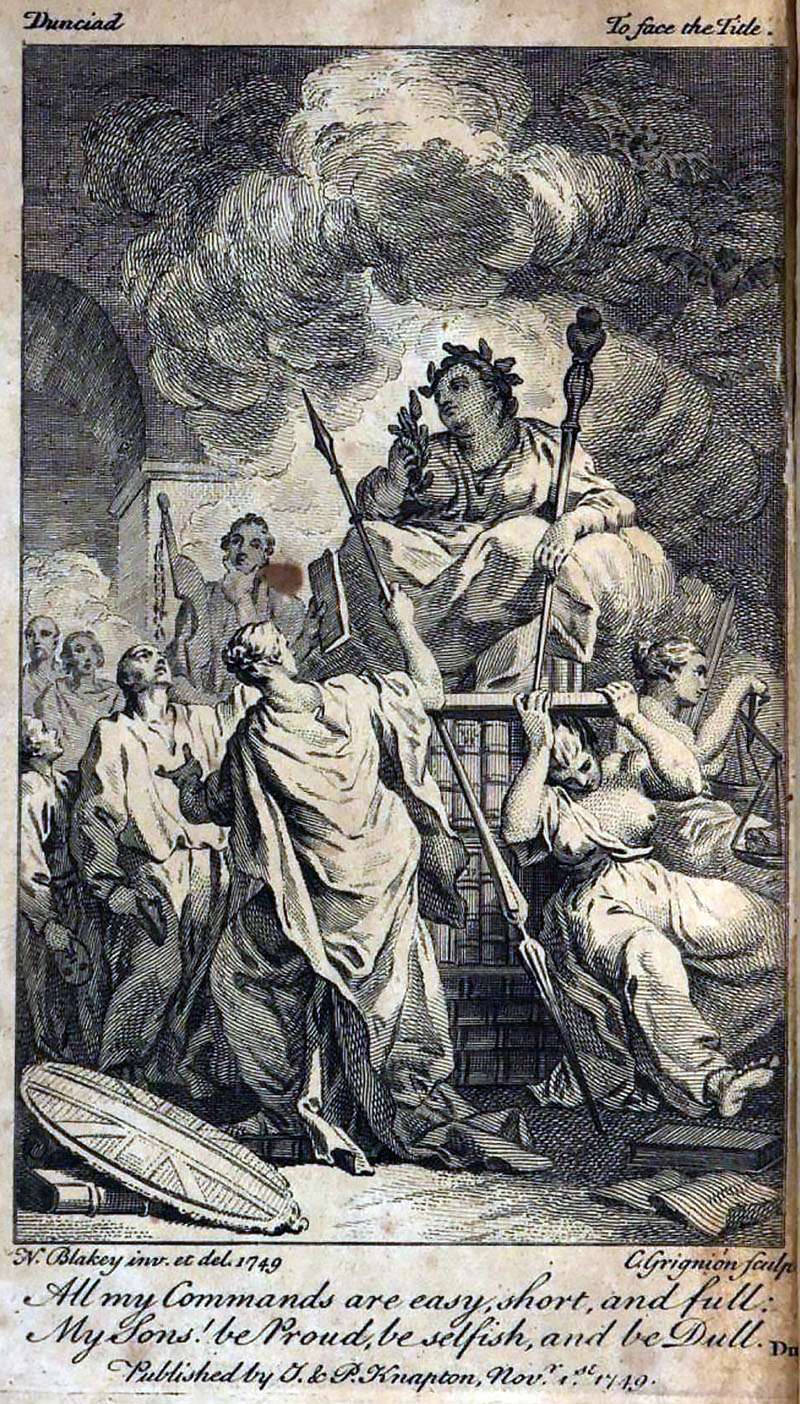 Figure 8. Dulness seated upon a pedestal of books, with bat-like owls (or an owl and a bat) hovering above right. Fog floats up behind her (an inversion of Athena seated upon the clouds or hovering over the city as in Figures 2 and 3 above). An anti-Athena, Dulness is heavy and graceless: instead of armour, a shapeless garment covers her breasts; her shield (this is the shield of Britannia) is carelessely tossed on the ground at her feet, along with scattered papers and books. One volume is trodden upon by an acolyte who carries a spear reminiscent of Pallas Athene's; Dulness, in contrast, holds a spear or sceptre dulled by what seems to be a sleeping owl perched on the tip. A thoughtful fellow follows behind with a wooden shoulder yoke like those used by milkmaids to carry fresh milk to customers (possibly a reference to Hogarth's "The Distrest Poet," 1736-7, 1741, said to be inspired by The Dunciad [view on Wikimedia Commons: 1736; 1741]). On the right is "Poetic Justice, with her lifted scale; / Where, in nice balance, truth with gold she weighs, / And solid pudding against empty praise." Frontispiece of The Dunciad, Complete, in Four Books, According to Mr. Pope's last Improvements. with Several Additions now first printed, and the Dissertations on the Poem and the Hero, and Notes Variorum. Published by Mr. Warburton. Printed for J. and P. Knapton in Ludgate-Street, 1749. Digitized by Google and Oxford University. 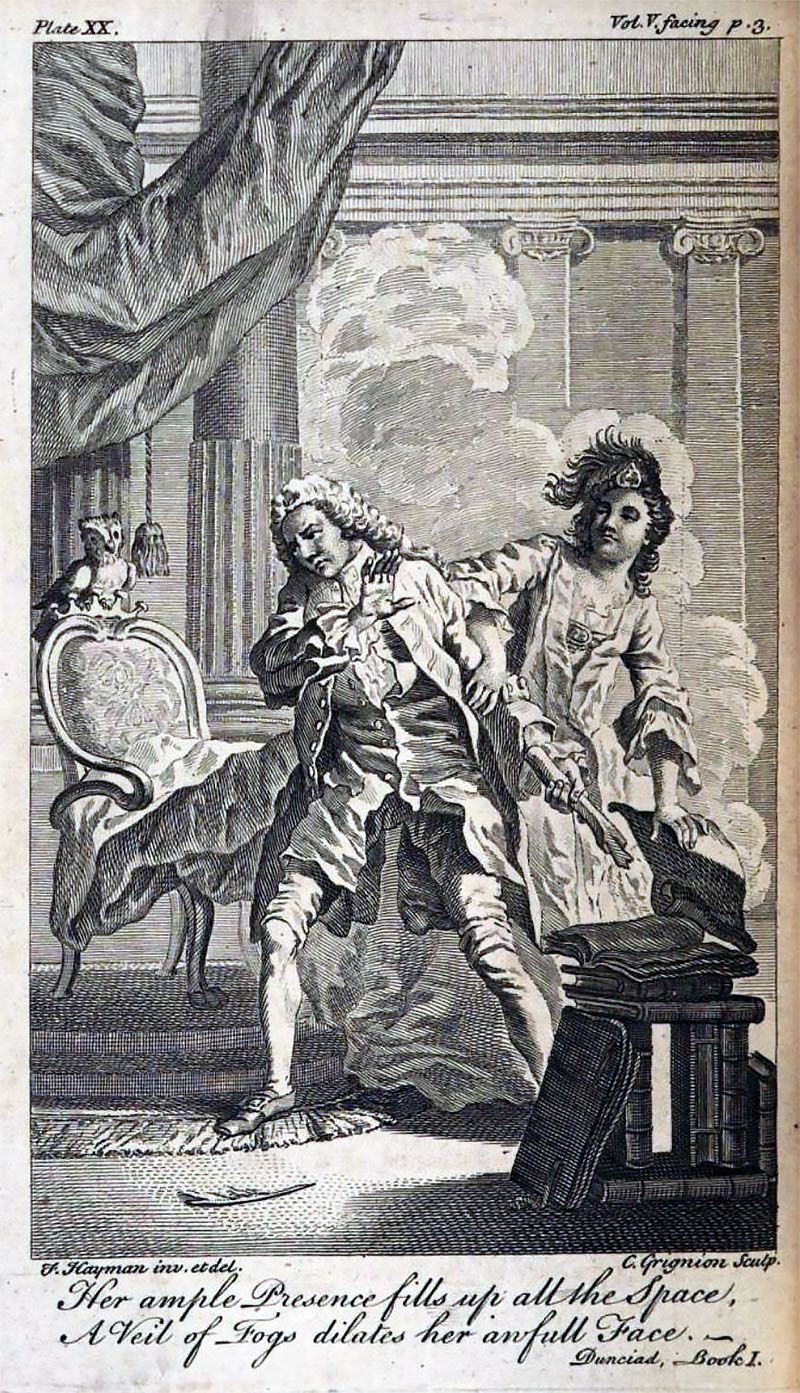 Figure 9. Dulness and her owl, surrounded by fog. Cibber has built a pyre of books that might otherwise be torn up to light candles or wrap pies:

O born in sin, and forth in folly brought!
Works damn'd, or to be damn'd! (your father's fault)
Go, purify'd by flames, ascend the sky,
My better and more christian progeny!
Unstain'd, untouch'd, and yet in maiden sheets;
While all your smutty sisters walk the streets.
Ye shall not beg, like gratis-given Bland,
Sent with a pass, and vagrant thro' the land;
Nor sail with Ward, to Ape-and-monkey climes,
Where vile Mundungus trucks for viler rhymes:
Not sulphur-tipt, emblaze an Alehouse-fire;
Not wrap up Oranges, to pelt your sire?
O! pass more innocent, in infant state,
To the mild Limbo of our Father Tate:
Or peaceably forgot, at once be blest
In Shadwell's bosom with eternal Rest!
Soon to that mass of Nonsense to return,
Where things destroy'd are swept to things unborn.
With that, a Tear (portentous sign of Grace!)
Stole from the Master of the sev'nfold Face:
And thrice he lifted high the Birth-day brand,
And thrice he dropt it from his quiv'ring hand;
Then lights the structure, with averted eyes:
The rolling smoke involves the sacrifice.
[...]
Rowz'd by the light, old Dulness heav'd the head,
Then snatch'd a sheet of Thulè from her bed;
Sudden she flies, and whelms it o'er the pyre;
Down sink the flames, and with a hiss expire.

The Goddess then, o'er his anointed head,
With mystic words, the sacred Opium shed;
And lo! her bird (a monster of a fowl,
Something betwixt a Heideggre and owl,
Perch'd on his crown. "All hail! and hail again,
My son! the promis'd land expects thy reign.

Plate XX in The Works of Alexander Pope Esq. In Nine Volumes Complete. With His Last Corrections, Additions, and Improvements. Published by Mr. Warburton. Volume 5. Printed for J. and P. Knapton, H. Lintot, J. and R. Tonson, and S. Draper, 1751. Digitized by Google and the University of Michigan.